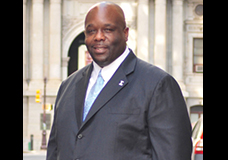 Mason’s campaign slogan, “Transform,” has been the beacon light through which his campaign was navigated. “My Brothers, together we will transform our organization to develop a fully functional Client Relationship Management System. We will monetize our property at 145 Kennedy Street, NW, Washington D.C. and continue our Anti-Hazing Campaign, through communication, continuing education and compliance,” he enthusiastically remarked. “Our Brotherhood Experience, Our Revenue Stream and Our Commitment to Risk Management and Membership Intake will be a priority for my administration,” he added.

Professionally, Mason directs sales for 77 WABC and WABC Syndication. His primary responsibilities include radio sales for “Imus in the Morning Show,” The Geraldo Rivera Show” and “The Sean Hannity Show.” Prior to his tenure with WABC, they were ranked between 18 and 19th in revenue in America’s largest radio markets. Today, WABC is a top 10 revenue earner in New York City, which places it as one of the top billing stations in America. Mason is recognized by his peers as one of the pre-eminent minds in development radio sales. He is one of only two African Americans executives serving in his role in at a general market radio station.

He holds a Bachelor of Arts Degree from Norfolk State University. He is married to Dionis A. Hussey, a member of Zeta Phi Beta Sorority, Inc. and has two sons Jonathan, Jr. and Jackson Alexander.

As Phi Beta Sigma Fraternity, Inc prepares to celebrate its 100th year anniversary on January 9, 2014, the organization’s founders, A. Langston Taylor, Leonard F. Morse and Charles I Brown, can be proud that their creation will be managed by Jonathan A. Mason capable, progressive and transformational leadership.