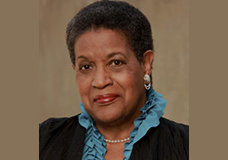 Honorees to be recognized at the 2014 Women of Power Summit Legacy Awards Dinner, hosted by PepsiCo, include:

“Each year, the presentation of the Legacy Awards at our Women of Power Summit delivers power examples to live by and ever-higher levels of inspiration,” says BLACK ENTERPRISE CEO Earl “Butch” Graves Jr. “This year’s awards evening will again represent a perfect start to a powerful weekend for the hundreds of women who will gather for a weekend of meaningful purpose and professional excellence.”

“We are thrilled that we will have this opportunity to pay well-deserved honor to women who are gifts to the world,” says Black Enterprise Business Report television show Host Caroline Clarke, who along with Black Enterprise Editorial Director Sonia Alleyne, serves as a co-editorial director of the Women of Power Summit. “Their examples are proper tribute to the Legacy Award honorees before them, and powerful motivation for those to come.”