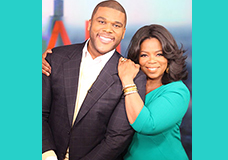 Tyler Perry’s popular sitcom For Better or Worse is coming to OWN: Oprah Winfrey Network with a third season of all new episodes debuting in the fall of 2013. In addition, the network has garnered the encore rights for the first two seasons of the sitcom’s 45 episodes that originally aired on TBS.

For Better or Worse will mark OWN’s third scripted series from Perry who has an exclusive deal with the network to produce new television series and projects. The first two original series—the sitcom Love Thy Neighbor and the ensemble drama The Haves and the Have Nots— are set to premiere in May on May 28 and 29, 2013. The original series mark the network’s first venture into scripted programming.

The series, For Better or Worse, which was basic cable’s #1 sitcom of 2011 and the #1 show on all of television with African-American adults, follows three couples who are at various stages of their relationships as they weather the ups-and-downs of married life and dating. The original cast is set to return in their starring roles including Tasha Smith, Michael Jai White, Crystle Stewart, Kent Faulcon, Kiki Haynes and Jason Olive. Production will begin in Atlanta in April.

“For Better or Worse is a great addition to our growing lineup of scripted programming from Tyler,” said Erik Logan, president, OWN. “We’re excited to build out OWN’s slate of original shows.”