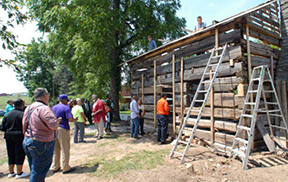 They came from all walks of life and across the country Saturday to spend a day working at the log cabin of Col. Charles Young.

Young was born into slavery at the log cabin in May’s Lick in 1864.  His family later moved to Ripley, Ohio and Young went on to have a distinguished military career in the United States Army. He graduated from the United States Military Academy at West Point in 1889; served as a Buffalo soldier, as well as military attache’ to Haiti and Liberia during his career; served as acting superintendent of Sequoia National Park; was a honorary member of Omega Psi Phi Fraternity.

The visit to the cabin, which has been undergoing a complete restoration since May, was an important step in the campaign to have Young promoted posthumously to the rank of brigadier general. Another step in the campaign is a tour of a bronze marquette (statue) of Young on horseback being planned for September with stops in Maysville and Louisville.  The unveiling of the statue will take place in Maysville, signifying Young’s tie to the county.

“I say we’re bringing him back home (in bronze),” said Charles Blatcher, founder and chief executive officer of NCBVO, the group sponsoring the campaign for Young’s promotion.  “We want the community to come out and celebrate his homecoming.”

Blatcher said the marquette is the model for a larger bronze statue of Young that will hopefully be erected in Washington D.C. one day.

“It would be the first American officer on horseback that is black in our nation,” Blatcher said.

Blatcher expressed his appreciation to the Mason County community for supporting the restoration project and said without action being taken when it did to purchase the land and begin the project, the cabin would have been lost.

The next step in the cabin project is to have a feasibility study conducted to determine the best use for the cabin.  Blatcher said the development of a long-term plan will include surveys of organizations around the country to “see what they would like to see take place and how the property can be showcased in the national arena.”

The goal of future use of the cabin is to bring economic development to Mason County, Blatcher said.

According to Denham, the Kentucky Tourism Department, the Kentucky Heritage Council, and Gov. Steve Beshear are lending their support to the project and statue tour.

“I commend Charles for his efforts. It’s an important project not only from a local point of view, but also on a state and national view,” Denham said.

Gallenstein said everyone is happy with the progress of the restoration, and the efforts to bring recognition to Young and the 400,000 black soldiers that have served the country during World War I.  Those soldiers, according to Blatcher, served under the command of the French.

“I encourage the people of our county and across the country to participate,” Gallenstein said.

For planning committee members Gore, Thompson and Bennett, the cabin project symbolizes Young’s ability to rise above his birth into slavery in a log cabin, to being one of the most revered military officers of his time.

Bennett, also an Omega Psi Phi member, said there is broad international interest in Young’s achievements and the NCBVO campaign for his promotion.  He said seeing the restoration of the cabin embodies his connection with Young that “we are here out of conviction, not convenience.”

Gore said Young’s story could be an inspirational story for all young people in the world, citing Young’s service to his country, his musical abilities, speaking multiple languages and intellect.

“This is a project for all the people…love him as a local hero and because he is an international man,” Gore said.

Thompson said seeing the log cabin restored is monumental, because it is a reminder of how a person can have humble beginnings in a log cabin and go on to have a distinguished career.

He said it is Young’s professional and personal accomplishments that make him a person of exemplary character.

“He was a giant in American history,” said Blatcher.

To learn more about the campaign to promote Young to brigadier general, conduct an Internet search using the key words: National Coalition of Black Veteran Organizations.