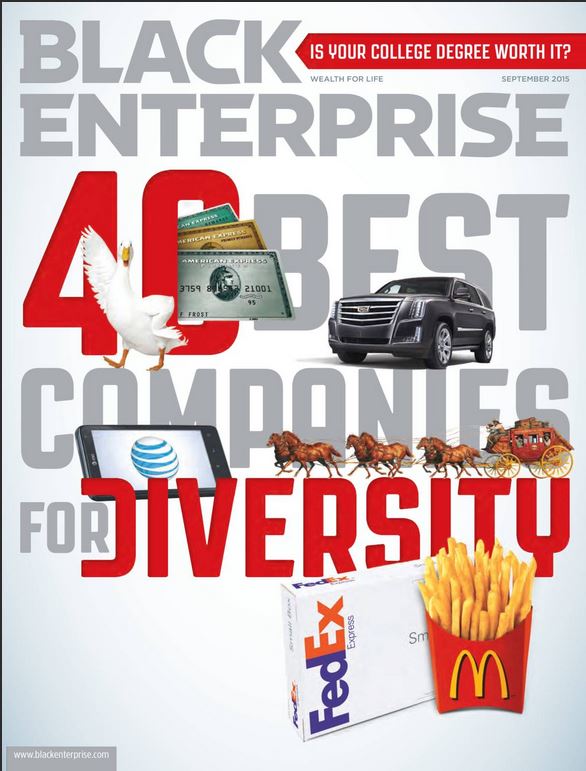 BLACK ENTERPRISE has released its listing of the 40 Best Companies for Diversity as featured in the publication’s September 2015 issue. While the list showed most companies scoring high marks in senior management and corporate governance, most were found unsatisfactory when it came to procurement dollars spent with firms owned by African Americans and ethnic minorities – demonstrating a critical need to diversify this area.
In 2005, BLACK ENTERPRISE began publishing its list of the “Best Companies for Diversity,” identifying those corporations that proved to be the best of the best in executing policies and developing a culture that promoted inclusion for African Americans within their workforce, senior management ranks, corporate boards, and supplier pools. Highlights of this year’s list include four companies with black CEOs, 59 black female senior managers, and 72 black board members across companies.
In compiling this year’s list, the BLACK ENTERPRISE research team sent surveys to more than 1,000 of the largest publicly traded companies and global companies with significant U.S. operations. This year, BLACK ENTERPRISE gained support from the Executive Leadership Council, the pre-eminent organization of current and former CEOs, board members, senior executives, and leading entrepreneurs in producing our list.
Companies were evaluated based on representation of African Americans in senior management and on their board of directors, percentage of African Americans within the employee base and the procurement dollars spent with African American or ethnic minority group firms. There is still work to do in terms of major corporations fully embracing diversity; hundreds of companies were either unresponsive or declined to participate in our survey process.
Of the 40 best, Exelon Corp., IBM Corp., McDonald’s Corp., and MGM Resorts International were some of the companies that demonstrated significant strengths in the four areas surveyed.