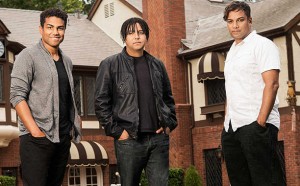 Lifetime’s all-new docu-series “The Jacksons: Next Generation” (#JacksonsNextGen) focuses on the third generation of the famed Jackson family — Taj, Taryll and TJ — Tito Jackson’s sons and nephews of the famed Jackson 5. Premiering Friday, October 2, at 10PM ET/PT, the series features the brothers as they work to balance a career and their lives as traditional family men while living up to the pressures and demands that comes with their last name.
The siblings, known as the music group 3T, have toured and sold more than three million records worldwide just off their debut album. Still impacted by the loss of their mother, Dee Dee, the brothers are raising their children and managing the day-to-day tasks within their families, just like everyone else. Their quest for normalcy, however, often collides head-on with the good and bad of living with one of history’s most renowned last names. The series reveals what it’s like for them living with the last name Jackson including how they deal with constant rumors, stalkers, and frauds who all want a piece of anything and anyone related to the family’s legacy.
Produced by Go Go Luckey Entertainment, the series is executive produced by Henry Capanna, Julie Auerbach, Tina Gazzerro, Dennis Principe, Taj Jackson, Taryll Jackson, TJ Jackson, Megan McGuiness and Henri Hebert. Lifetime’s Eli Lehrer, Mary Donahue and Kimberly Chessler also executive produce. The series consists of six episodes.