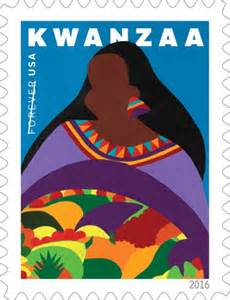 Maulana Karenga created Kwanzaa in 1966, as the first specifically African-American holiday,(but see also Juneteenth). According to Karenga, the name Kwanzaa derives from the Swahili phrase matunda ya kwanza, meaning “first fruits of the harvest”,although a more conventional translation would simply be “first fruits”. The choice of Swahili, an East African language, reflects its status as a symbol of Pan-Africanism, especially in the 1960s, although most of the Atlantic slave trade that brought African people to America originated in West Africa.

Kwanzaa is a celebration that has its roots in the black nationalist movement of the 1960s and was established as a means to help African Americans reconnect with their African cultural and historical heritage by uniting in meditation and study of African traditions and Nguzo Saba, the “seven principles of African Heritage” which Karenga said “is a communitarian African philosophy”. For Karenga, a major figure in the Black Power movement of the 1960s and 1970s, the creation of such holidays also underscored an essential premise that “you must have a cultural revolution before the violent revolution. The cultural revolution gives identity, purpose and direction.”

During the early years of Kwanzaa, Karenga said that it was meant to be an “oppositional alternative” to Christmas. However, as Kwanzaa gained mainstream adherents, Karenga altered his position so that practicing Christians would not be alienated, then stating in the 1997, Kwanzaa: A Celebration of Family, Community, and Culture, “Kwanzaa was not created to give people an alternative to their own religion or religious holiday.”

Many African Americans who celebrate Kwanzaa do so in addition to observing Christmas.