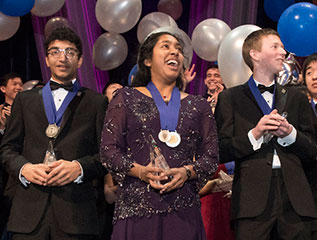 Society for Science & the Public and Regeneron Pharmaceuticals, Inc.  announced that Indrani Das, 17, of Oradell, New Jersey, won the top award in the Regeneron Science Talent Search, the nation’s oldest and most prestigious science and math competition. Forty finalists, including Indrani, were honored tonight at the annual Regeneron Science Talent Search Awards Gala for their research projects demonstrating exceptional scientific and mathematical ability, taking home more than $1.8 million in awards provided by Regeneron.
Indrani Das, 17, of Oradell, New Jersey, won the top award of $250,000 for her study of a possible approach to treating the death of neurons due to brain injury or neurodegenerative disease. A contributor to neuron death is astrogliosis, a condition that occurs when cells called astrocytes react to injury by growing, dividing and reducing their uptake of glutamate, which in excess is toxic to neurons. In a laboratory model, she showed that exosomes isolated from astrocytes transfected with microRNA-124a both improved astrocyte uptake of glutamate and increased neuron survival. Indrani mentors younger researchers and tutors math in addition to playing the piccolo trumpet in a four-person jazz ensemble.