A new model for civil rights monuments & memorials: I AM A MAN Plaza in Memphis #IAMAMANPLAZA

Sculpture, text and landscape come together to form an important new 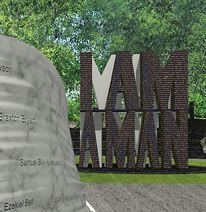 American Civil Rights memorial. Cliff Garten Studio is pleased to announce its design of I AM A MAN Plaza, a large-scale public sculpture park and memorial plaza commissioned to pay tribute to the members of the pivotal 1968 Sanitation Workers’ Strike and the legacy of Dr. Martin Luther King, Jr. The strike and its I Am a Man! slogan came to represent the struggle of the working poor and racial inequality in Memphis and beyond. The project was chosen out of a nationwide competition of 80 artists.

I AM A MAN Plaza was unveiled in a public ceremony at 11:30 AM on April 5, 2018, exactly 50 years after a march with Dr. King and the 1,300 sanitation workers was originally scheduled. The project was spearheaded by the City of Memphis and the UrbanArt Commission. It is a central component in the city’s “MLK 50” commemoration.

Garten and his studio led a design team with Memphis-based landscape architect John Jackson of JPA, Inc. for the 54,000-square-foot memorial plaza. As part of Garten’s plan, spoken word artist Steve Fox held an open dialogue with the greater Memphis community who selected pertinent historical text and created an original contemporary text which is etched into the marble gates to the plaza’s entry.  The texts combine as a meditation on America’s struggle and progress with racism and class inequity.

The 12-feet-tall I Am A Man sculptural block letters at the center of the memorial plaza are built of bronze on one side of the sculpture and stainless steel on the other side and are laser-cut with a historical text.  Says Cliff Garten, “The entire design of I AM A MAN Plaza is inclusive and participatory. I was continually drawn back to the powerful visual statement of the I Am a Man! picket signs produced by the sanitation workers on this very site in the historic Clayborn Temple. I wanted to give an interactive three-dimensional form to those compelling words and reemphasize their relevance in the 21st Century.”

The marble gates that stretch along the entry are sculpted as if the stone has been pulled into a tension and are carved with quotes from the strikers and strike organizers.  The strike’s timeline of events is carved into a black granite ring framing the lawn and the sculpture at the center of the plaza. The names of the 1300 Sanitation Workers are carved on the Dedicatory Wall.

I AM A MAN Plaza will provide visitors a continuing point of reflection and inspiration, inviting all to a peaceful, interactive and educational experience, while inspiring future generations to stand up for social justice and positive change.  The Plough Foundation is the project’s title sponsor.