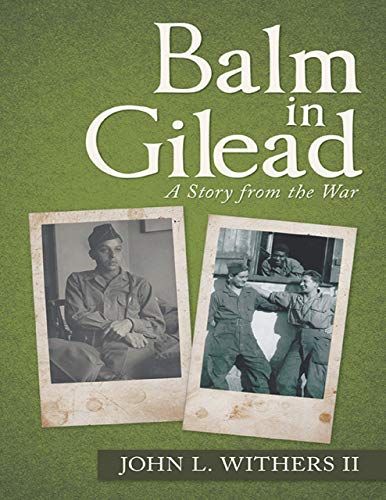 John L. Withers II’s captivating new book, “Balm in Gilead: A Story from the War,” presents a moving tale that is inspiring readers during today’s challenging times. At the end of World War II, an all-black U.S. Army truck company, commanded by his father, Lieutenant John L. Withers of Greensboro, North Carolina, concealed two destitute, young Jewish survivors of Dachau within the company contrary to strict army regulations.  For over a year, the soldiers hid the boys in their bivouacs, taught them the work of the unit, and forged close friendships with the young men.

Lieutenant Withers became a surrogate parent to the boys and slowly guided them towards understanding that, however horrid their pasts, the future yet held hope.  Although he lost contact with them on his return to Greensboro, Withers’ memory of his friends never faded.

Eager to reunite his father with those involved in the rescue decades later, Withers II details his work to search for the roots of his father’s story and locate soldiers from his father’s unit to reunite old friends. In graceful, often elegant prose, the author has resurrected his father’s story from the past and, in so doing, has provided readers important lessons for today.

“In devoting more than a decade of my life to unearthing the story during my father’s elder years, I made my own discoveries about human nature in its aspects both of unfortunate cruelty and, sometimes, of moral transcendence,” says Withers “I hope readers take away the simple fact that the actions of individuals, however humble, can make a lasting difference to others.”

A moving example of cross-racial and cross-cultural friendship in a time filled with prejudice and religious hostility, “Balm in Gilead” is a poignant reminder of the power kindness and empathy have to change the course of history.

Balm in Gilead: A Story from the War

Available at the LULU Online Bookstore, Amazon and Barnes & Noble

Ambassador John L. Withers II spent much of his childhood abroad with his Foreign Service parents.  Their assignments included Laos, Thailand, Burma, Korea, Ethiopia, Kenya, and India.  On returning to America, he earned a B.A. from Harvard in 1970; a Masters in East Asian Studies at McGill in 1975; and a Ph.D. in the History of Modern China from Yale in 1983.  As part of his doctoral studies, he conducted dissertation research at Nanjing University in China in 1980-81.  After himself joining the Foreign Service in 1984, Withers served in the Netherlands, Nigeria, Russia (just as communism fell), Latvia, Slovenia, and Albania (as Ambassador), as well as such domestic assignments as Special Assistant to the Deputy Secretary of State and Director of the Operations Center. For his work in support of Albanian democracy, the Albanian city of Vlora named him an honorary citizen as it marked the 100th anniversary of the country’s independence in 2012. Three years later, Albania’s capital, Tirana, awarded him the keys to the city. Now retired, Withers and his wife, Maryruth Coleman, also a senior Foreign Service officer, live in Potomac, Maryland. To learn more, please visit https://www.johnlwithersii.com.