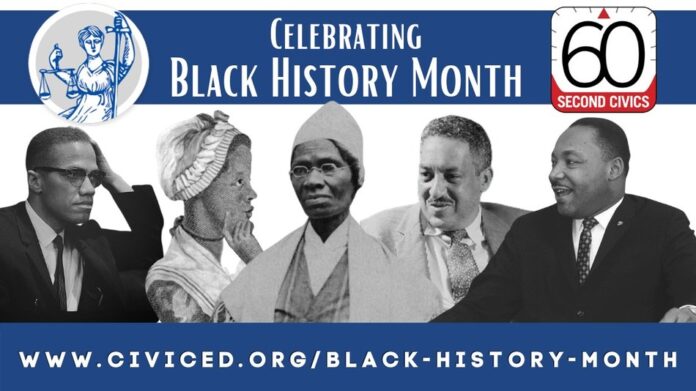 The Center for Civic Education is celebrating Black History Month with a special 60-Second Civics podcast series tied to lesson plans, webinars and other important materials. Each day in February, 60-Second Civics will feature a podcast episode dedicated to the African American experience, with a special focus on the expansion of civil rights since the nation’s founding era and the confrontation of modern challenges to full equality.

“Now more than ever, our work to promote equality and justice for all has taken on new importance as our nation faces the twin challenges of violent extremism and a COVID-19 pandemic that has disproportionately affected African American communities,” said Christopher R. Riano, the Center’s president. “Our 60-Second Civics podcast and other materials will help explain how we got to where we are today and bridge the gap between America’s ideals of equality and their realization.”

“The Power of Nonviolence” is the theme of six free lesson plans devoted to Black History Month. More free lesson plans and self-paced online courses on the foundations of American representative democracy can be found in the Teacher Resources section of the Center’s website.

Power to the People is a seven-part on-demand webinar series that explains key concepts of American self-government. The series features two webinars of special importance to Black History Month: “The Power of Symbols: Monuments and Flags” with Brandon Hasbrouck, assistant professor of law at Washington and Lee University School of Law and “The Power of the Criminal Justice System” with Hernandez Stroud, counsel for the Brennan Center for Justice.

The Center for Civic Education is the nation’s largest civic and constitutional education organization, dedicated to promoting an enlightened and responsible citizenry committed to democratic principles and actively engaged in the practice of democracy. The Center has reached more than 30 million students and their teachers since 1965. Learn more about the Center for Civic Education.