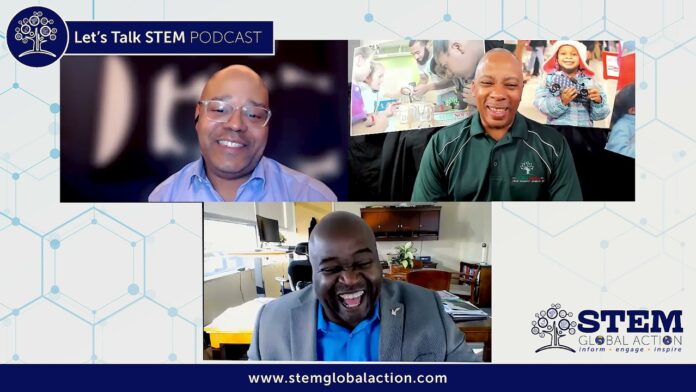 On the Let’s Talk STEM with Dr. Calvin Mackie podcast, University President Cites a “Fundamental Problem with How We’re Educating and Training.”

“The institutions of the future will be those that are access institutions that educate everyone… We have to reeducate and retrain this nation,” Dr. Washington says on the new podcast episode debuting today on YouTube with audio on iheart and other popular podcast networks.

“You can’t prepare the masses to deal with the challenges if you’re not even admitting the masses in. And then the second big problem is that we’re not dealing with the change that’s happening around us in any measurable way,” Dr. Washington adds, noting that institutions, facilities, systems and curriculums aren’t keeping up with the jobs that are now in demand.

Six out of the top 10 jobs in demand, he says, did not even exist 10 years ago. The nation wasn’t thinking about training drone pilots or drone operators, or dealing with cryptocurrencies, and there were no Bitcoin jobs around, Dr. Washington says.

“The best institutions in the future will be those institutions that are best positioned to educate everyone,” he notes. “And we have to educate everyone for the right opportunities. We have 12 million unfilled jobs in the country. We have 10 million people unemployed, and those 10 million unemployed don’t qualify for the 12 million job openings we have. So how in the world do we have an unemployment problem and a labor shortage problem at the same time? I don’t remember a time in our history when we’ve had that issue. So that tells you that there’s a fundamental problem with how we’re educating and training.”

At George Mason more than 70% of students graduate regardless of their race or ethnicity, including 73.7% of African Americans, compared to a national average of 44.7%, says Dr. Washington, who became president in July 2020. Hispanic, White, Asian, and Black students at George Mason all graduate at rates between 69.2% and 73.7%. “This institution has put the mechanisms in place to ensure that everyone who comes here graduates and graduates at about the same rate.”

Dr. Mackie, who has known Dr. Washington since they were students at different institutions more than 30 years ago, applauded his friend for the high graduate rates.  “George Mason is doing an amazing job,” Dr. Mackie says. “And I was blown away when you gave me those statistics because I really didn’t believe they existed in a place called America.”

During the podcast, Dr. Washington, who like Dr. Mackie, has undergrad, graduate and doctorate degrees in engineering, discusses his humble upbringing, reveals that his mother was concerned because he kept taking apart his toys as a child, explains how he met Dr. Mackie and praises Dr. Mackie for advancing STEM education through STEM Global Action.

“We’ve created a model to expose and inspire and engage communities in STEM especially low-income, low-resource communities,” Dr. Mackie says. “And we want to bring that type of hope, close that belief gap for all of our children, so they can wake up every day and know they live in the greatest country in the world, a country where they can create a better tomorrow for themselves.”

In 2013, Dr. Calvin Mackie founded STEM NOLA, a New Orleans-based, non-profit committed to expanding STEM education at churches, community centers and schools, particularly in communities of color. His goal is to make STEM education available in ALL communities. In July 2021, Dr. Mackie launched STEM Global Action, a campaign and network of affiliates, including STEM NOLA, that pursues STEM education for children, parents and communities across the U.S., and abroad. His initiatives have impacted more than 80,000 students, 20,000 families and 2,150 schools across the U.S., and in five other countries.

(For print or broadcast interviews with Dr. Mackie, contact Michael Frisby mike@frisbyassociates.com or 202-625-4328)