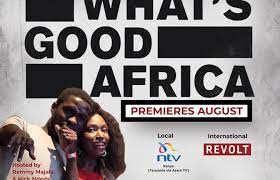 “With Black culture driving global culture, REVOLT is committed to expanding globally both in terms of footprint and storytelling,” said Detavio Samuels, CEO of REVOLT. “We are committed to telling stories from across the Black diaspora, and are excited to welcome back What’s Good Africa through our content partnership with What’s Good Networks.’

The second season of What’s Good Africa was co-produced by partner media powerhouses What’s Good Networks, a content studio collaborating with Africa’s leading content creators, and Ark House Productions, an Accra/Johannesburg-based media company with expertise in creating compelling content and event management. The series’ continuation will bring together the industry’s leading creatives who will highlight African culture through the lens of local trend setters.

“No matter where you go in the world, Hip Hop and music culture constantly bring people together,” said Alex Kwesi Crassie, Founder and CEO of Ark House Productions. “I’m super excited to partner with What’s Good Networks and join What’s Good Africa as a host and Executive Producer. This second season is going to be one you don’t want to miss.”