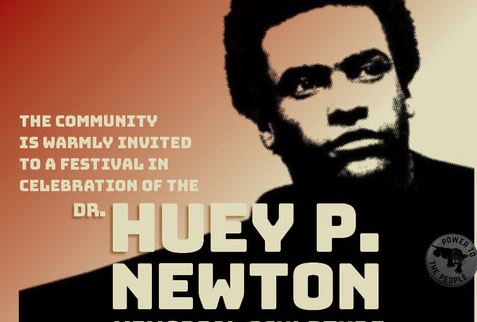 The Black Panther Party for Self Defense was founded in Oakland in 1966 by Dr. Huey P. Newton and Bobby Seale. Their legacy remains an enduring force within Oakland, from the dozens of sites of historical significance to the Party to the community artists have who honored the Black Panther Party with gorgeous murals on buildings and commemorative ceremonies in the streets.

“With this sculpture of Huey, we are writing a new chapter for the Party where we are finally claiming public spaces to declare that the Black Panther Party were vanguards and protectors of the communities they served and that their contributions made a difference,” said Fredrika Newton, co-founder of the Dr. Huey P. Newton Foundation and Dr. Newton’s widow. “That Huey will continue to look over the city he loved feels incredibly powerful right now. He’s home.”

The bronze sculpture of Dr. Newton is the second initiative spearheaded by the Dr. Huey P. Newton Foundation in 2021 as part of its mission to preserve and promote the history, ideals and legacy of the Black Panther Party. In February, a three-block section of 9th Street was renamed to Dr. Huey P. Newton Way, which is where the bronze sculpture will be located, and near where Huey took his last breath.

The sculptor is local Oakland artist Dana King, an African American woman who creates monuments of Black bodies in bronze. King spent time with Ms. Newton as well as family members, former Party members and others who knew Dr. Newton and shared stories during the creative process.

Of this time, Ms. King reflects: “It is a rare gift to be able to work closely with someone who knew the subject of my work. It was Fredrika’s openness that helped guide my hands and my heart in creating the work that I did.”

As the community commemorates the founding of the Black Panther Party by unveiling a sculpture of their co-founder, we remember the Party as both a small grassroots organization in Oakland, and the international organization it grew into. Although inaccurate stories steered the focus away from important initiatives, namely its 65 “Survival Programs” that provided essential services, like free food, medical clinics, and education to the communities they served, the Black Panther Party and their contributions to serving the community continues to have rippling effects to this day.

“There is great weight in this moment, particularly for all the living members of the Black Panther Party, to have this kind of public art produced and displayed,” said Dr. Xavier Buck, Deputy Director of the Dr. Huey P. Newton Foundation. “This is just the beginning.”

Public art is a significant way to build the dialogue around telling the accurate history of the Black Panther Party, which has long been maligned and corrupted by government and media narratives that led to the murder and incarceration of countless members of not just the Black Panther Party, but of the Rainbow Coalition they created and joined forces with to protect oppressed populations.

On behalf of the Dr. Huey P. Newton Foundation, Ms. Newton is proud to gift the Huey Newton Memorial Sculpture to the city of Oakland as a permanent fixture in their landscape. The Foundation would like to thank the community members and supporters for their enduring love and financial contributions, all of which have made this moment possible. The sculpture unveiling event is free and open to the public, with donations being accepted by visiting the Foundation’s website at Huey.one