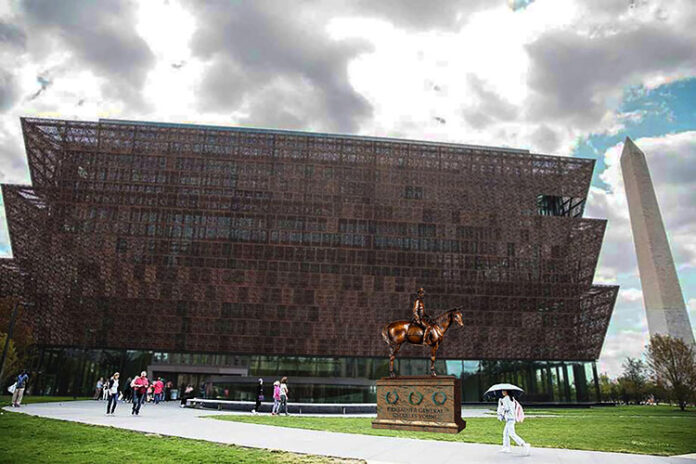 Why is a statue of Brigadier General Charles Young not welcome on the National Museum of African American History and Culture (NMAAHC) grounds? We are calling on Black elected leaders and the National Association for the Advancement of Colored People (NAACP) to assist with attention due and appropriate resolve for the condition. The National Coalition of Black Veteran Organizations posits the Black Military History Gallery in the NMAAHC is the cornerstone of American Civil Rights legislation. We raised questions prior to the institution’s opening about its planned recognition for this segment of our history. Our position and recommendations have remained consistent. We have added a statue of Brigadier General Charles Young on horseback to the conversation following a site survey that identified the property as the ideal location for the monument.

Undoubtedly, there will be those who disagree with what we have to say on this subject. However, we are not into pretending everything is all right for fear of what others may think. It is more important to us to not allow Black Military History, the cornerstone of the Civil Rights Movements to continue to be marginalized in importance. The museum’s inaugural administration took unfair advantage of the public’s lack of information and understanding of the importance of this aspect of history. In doing so, they also demonstrated their lack of understanding of the importance of Black Military contributions. They bargained off the History without the public having the faintest idea of what they did. They obviously believe the adage that “ A one eyed man is the leader in the village of the blind.”

History is more important and valuable than money. People not knowledgeable of their past have little understanding of where they were, where they are, no idea of where they are going, and knowledge is priceless. Our position on the subject causes us to question the design motivations of the NMAAHC. Why would there be a replica studio honoring a contemporary celebrity larger than the average gallery size in the museum? Why is the entire top floor, the crown level of the facility devoted to sports and entertainment reinforcing cultural bias and general stereotypes, as opposed to recognizing more of our intellectual accomplishments? With due respect for those who have found success in the sports and entertainment fields, does those subjects categorically warrant one-third the floor space in a building dedicated to Civil Rights? Obviously, money was the influencing factor in determining the importance of the subject matter and degree of recognition.

We have received question on whether Oprah Winfrey was aware that the replica of her studio in the facility exceed the size of the history galleries? We do not know if the ten thousand square feet studio was by her demand in exchange for a reported fifty million dollar donation. Or is it the result of a poor administrative decision over-compensating for the generous contributions from the sports and entertainment segments of our society? Building a national home for our history should have held the same reverence as building a church or temple. Obviously, the then administration did not share that sentiment. They placed greater emphasis on the container (the physical building) versus the historical content. We are lucky Oprah did not kick in another fifty million dollars, because the museum might have been (The Oprah Winfrey National Museum of African American History.) Ms. Winfrey may have been simply fine with her name on the cornerstone of the building acknowledging her generosity.

The administrative decision may still prove embarrassing to parties involved. Especially when the public becomes aware of how the exhibit space was used as a bartering item for donations. The Black Veterans community has cause to feel the greatest insult. Black Military History took the largest hit in exhibit space. There is a broom closet in the facility larger than the three thousand square foot Black Military History Gallery. Let me raise another question: Why is there not a suit/flight jacket or something worn by former President Barack Obama acknowledging his service as the first Black Commander-in-chief of the Armed Forces in the Black Military History Gallery? Our military history and the then legendary Colonel Charles Young laid the grounds for the former Commander-in-chief to reach that historic first in American History. We believe that history making event should be on prominent display in the gallery.

The current staff of the National Museum are not to blame for originating past administrative decisions. We understand they’re not wanting minutes or recordings of their comments regarding the matter. They would prefer to not acknowledge the subject and are deserving a pass on that question. Their responsibility is resolving the intentional omission created before they arrived. The proper party to address our concerns is Secretary of the Smithsonian Institution (Mr. Lonnie Bunch). He was then the inaugural NMAAHC Director, the deal maker who placed the value of money over the value of history. His willingness to make the tradeoff was to his personal benefit; he was named Secretary of the Smithsonian Institute as a reward for supervising the development of the facility.

We are currently waiting for an explanation from either party, Smithsonian Institution Secretary or NMAAHC Director, regarding why a statue of Brigadier General Charles Young is not welcome on the museum grounds. We have called on Black elected leaders and the NAACP to insist the subject receives proper attention. The call has gone without response. We are insistent on giving this subject the public airing it deserve. We encourage the public to sign the petition at the link below. We will keep you posted.