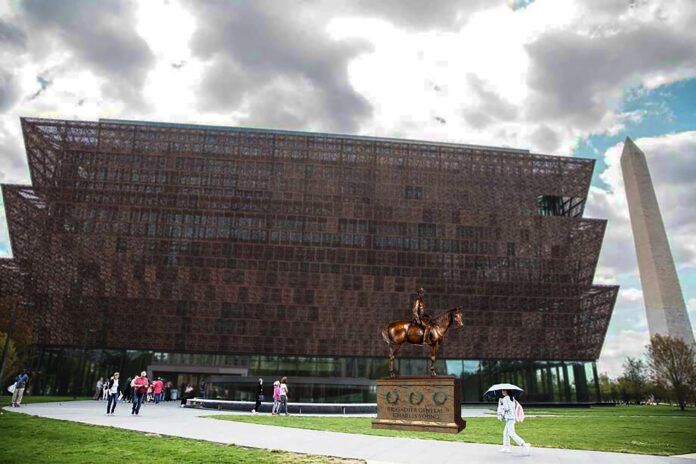 (This article is free to use in publications and media sources with credit to author.)

Oakland, CA….The National Coalition of Black Veteran Organizations have launched a petition drive to place a statue of Brigadier General Charles Young on the grounds of the National Museum. The statue will memorialize the late Buffalo Soldier’s 1918 walk/horseback ride from Wilberforce, Ohio to Washington, DC. The 497 mile ride demonstrated his fitness to return to active duty after a forced medical retirement from the segregated US Army in 1917. The statue will symbolize the honor and dedication of all Black Veterans for the merits of their contributions before what is known as the Civil Rights era. Black Military History is the cornerstone of the Civil Rights Movements dating back to abolitionist Fredrick Douglass.  The coalition would like to make the statue a gift from the Black Veterans community to history and the Nation. There is no statue of a Black soldier/officer on horseback adorning any street in the nation’s capital. Brigadier General Charles Young would be the very first.

In February, we contacted the National Museum making a request they allow the statue placement on the public grounds. With the request they received a video link to our Sculptor Antonio Mendez portfolio and video titled: Inspection of the Colonel Charles Young Maquette (You tube: Antonio Mendez Portfolios (tobymendezstudios.com)     Inspection of the Colonel Charles Young Maquette – YouTube). We commissioned two castings of the maquette both are on public display at the Kentucky Center for African American Heritage and the Buffalo Soldiers National Museum in Houston, Texas. With deep respect and intent, we surveyed a dozen locations in Washington DC., seeking potential locations for the statue. The National Museum property proved to be the most favorable. The National Museum recently declined the request without explanation.

You tube:  Antonio Mendez Portfolios (tobymendezstudios.com)      Inspection of the Colonel Charles Young Maquette – YouTube. We commissioned two castings of the maquette both are on public display at the Kentucky Center for African American Heritage and the Buffalo Soldiers National Museum in Houston, Texas. One would think based on our history and preparation that we are serious about the project. We surveyed a dozen locations in Washington DC., seeking potential locations for the statue. The National Museum property proved to be the most favorable. The National Museum recently declined the request without explanation.

Despite the unexplained rejection, the property is the most appropriate public location for the statue. There is a direct association between the institution’s Civil Rights theme, Black Military History, and the legendary Buffalo Soldier. Brigadier General Charles Young is an icon of Black military service, symbolizing longevity, dedication, and honor. In addition, the statue would give honor to World War I Black Veterans. Their service and personnel are the least recognized in our history. The question we pose to the National Museum of African American History is “why not.” The statue would aid the limited presentation in the Black Military History gallery.

The National Museum has shown some deference toward the subject of our military history. Per my past mention, history institutions devote display space in accordance with their interest in the subject matter. The average gallery size in the three hundred and sixty thousand square feet facility is seven thousand square feet. With exception is Oprah’s studio replication at ten thousand square feet, and sports and entertainment galleries comprising the top floor. The Black Military History gallery is limited to three thousand square feet. There are broom closets in the institution larger than the Black Military History gallery. Let me present that in another way; Oprah’s fifty million dollars contribution is three times more valuable by square footage example than the historical contributions of Black servicemen and servicewomen who have contributed to the nation and Civil Rights from the Revolutionary War forward. I use that example not begrudging Oprah. Quoting Billie Holiday, “God bless the child that’s got his or her own.” My point of reference is to emphasize how the history appears compromised in exchange for money. Again, an institution shows interest through the square footage it contributes to display a subject.

Let me be clear in what we have requested: We are asking for one hundred square feet (a ten foot by ten square foot) plot of land outside on five acres (two hundred and eighteen thousand square feet lot.) We are disappointed about this becoming a public fight. However, we are willing to fight for the location which is public property, and the most fitting for the statue. Its presence also lends to the historical appearance of the physical museum edifice.

We plan to visit the museum at the end of the month. We have invited the Museum to have its chief curator to meet with a small group to explain the Institution’s decline of our request. The difference between a private museum like the Getty and the public institutions lies in public accountability. We plan to invite the media to join us for the visit. In the meantime, we have launched a petition drive seeking public approval for the idea. The petition is reachable through the following link below. Please sign your name and pass it on to others.

Sign the petition: The petition is reachable through the following link:  Petition · Black Veterans call for statue of B-Gen Charles Young on National AA Museum grounds in DC. · Change.org Please sign your name and pass it on.