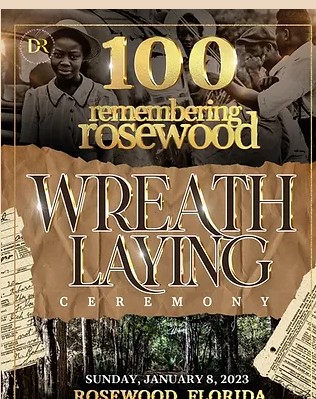 the Descendants of Rosewood Foundation, Inc. announced the Remembering Rosewood Centennial commemoration. This centennial anniversary will honor the legacy of bravery, determination, and perseverance of the eight families impacted by the Rosewood Massacre of 1923. The week-long commemoration will take place at the University of Florida in Gainesville from January 8 – 14, 2023, and will honor the lives of those lost 100 years ago and explore what the next 100 years look like for Black America. The University of Florida is the host sponsor of the centennial commemoration, the title sponsor is Holland & Knight Law Firm, and the presenting sponsor is the Southern Poverty Law Center.

The goal of this carefully curated week of events is twofold, first, to gather in community for a larger conversation around race in America, human rights and civil rights, land ownership, and wealth accumulation, and second, to forecast what the next 100 years look like for the next generation. Events include the Rosewood Traveling Museum opening at the University of Florida, Wreath Laying Ceremony, The Legacy Forum, Next Gen seminars, movie screenings, and special guest appearances from some of the country’s leading scholars, activists, and cultural workers.

The descendants of Rosewood became the the first African Americans to receive reparations in America.

A century ago in Levy County, Florida, the town of Rosewood experienced one of the most horrific events in American history. In January 1923, a racially motivated attack decimated the predominantly African-American town and devastated its residents. This massacre has been discussed and dissected for years. Despite being terrorized by those events, survivors and descendants of Rosewood got justice, becoming the first African Americans to receive reparations from a legislative body in America.

“The future starts with honoring the lives that were taken, acknowledging the trauma that was left behind, sharing the stories of the past, and celebrating the promise of all that lies ahead,” said Gregory Doctor, the cousin of Arnett Doctor, the descendant who led the fight for the families’ historic reparations settlement. “We look at this event as a launch pad for progress and are honored to lead the charge in shaping what the next 100 years looks like for our country.”

There are eight families whose direct descendants remain to tell the stories of resilience and fortitude that defined the town of Rosewood: the Bradleys, the Carriers, the Colemans, the Edwards, the Evans, the Goins, the Halls, and the Robinsons families. But a simple request two years ago sparked this centennial movement. Before she passed away, The Rosewood Family, Inc. historian Barbara Scantling Moore asked the family members to pass on the knowledge of the Rosewood legacy to the public. Inspired by Barabra’s request, The Descendants of Rosewood Foundation, Inc. was born, ready to be a source of inspiration for the next 100 years and beyond.