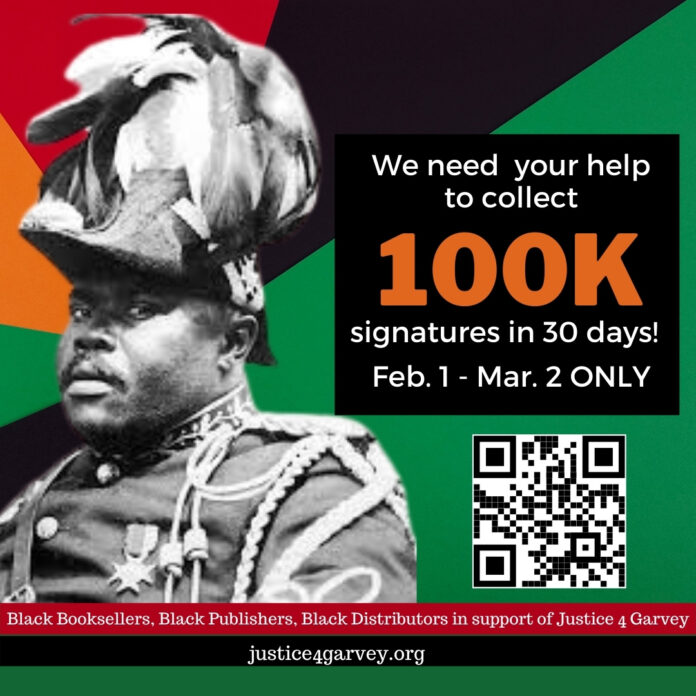 Black booksellers, publishers, and distributors throughout the U.S. have partnered with the Justice4Garvey campaign to petition President Joe Biden to grant a posthumous pardon to civil rights leader Marcus Garvey. The goal of the campaign is to gather the required 100,000 signatures necessary to elicit a response from the President. The signatures must be collected within a stipulated 30-day period, from February 1, 2022 to March 2, 2022. The campaign is focused on raising public awareness and collecting signatures during Black History month. To sign the petition and receive updates, visit Justice4Garvey.org
This effort of Black booksellers, publishers and distributors is co-led by MahoganyBooks, The Dock Bookshop, Black Classic Press, AALBC.com and Africa World Press. The group issued the following statement:“We are asking President Biden to make amends for the 1923 unjust persecution and imprisonment of the Honorable Marcus Garvey. Garvey’s conviction took place in a trial replete with bias and error, including insufficient evidence, perjury by a witness at the initiation of the U.S. government, and his proceeding as a criminal defendant without the benefit of a lawyer. We believe that a presidential pardon will acknowledge, and begin to right, the wrong committed against Marcus Garvey, and by extension, the global community of Black people. We are calling on global citizens who believe in restorative justice to sign the petition for a presidential pardon for Marcus Garvey, starting on February 1, 2022. We also encourage you to share the petition with your family, friends, and your social and professional networks throughout Black History Month.” Dr. Julius Garvey, Marcus Garvey’s son, stated in response that “Blackbooksellers and publishers are the keepers of our history and our stories. This group is helping ensure that my father’s life and legacy is honored and told truthfully. I applaud these Blackbooksellers and publishers from around the country working to raise the visibility of the Justice 4 Garvey campaign and collecting petition signatures to help clear his name.” On Sunday, February 6th, 2022 at 6:00 PM Eastern Time, a special Town Hall for the public is scheduled and will include presentations from Dr. Julius Garvey, son of the Hon. Marcus Garvey, and several other leaders in an effort to inform and encourage the community at-large to sign the global petition.
﻿Register to attend the event here: https://us02web.zoom.us/meeting/register/tZwtdu6prjMrG9fIFbIO1_fu_mA7do4RSSK3
About Justice 4 Garvey: Spearheaded by the Caribbean-American Political Action Committee, Justice 4Garvey aims to exonerate Marcus Garvey, civil rights and anti-colonial leader. In May 1923, Garvey was unjustly convicted of mail fraud in relation to the operation of his signature program for Black economic independence, The Black Star Line. His movement, which espoused Black pride and Black self-reliance, economic independence, and Black unity, garnered unprecedented support around the world. The exoneration committee is led by Global Chair, Dr. Goulda Downer; and Global Vice-Chairs, Dr. Ayize Sabater, Dr. Elaine Knight, Dr. Felicia Boadoo-Adada, Ms. Madia Logan and Mr. James Gordon.