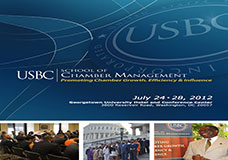 As the reach and influence of the U.S. Black Chamber, Inc. (USBC) continues to grow, we find increasing evidence that the USBC approach to expanding opportunities for Black-owned businesses is attracting supporters to our cause, irrespective of political party affiliation. This is exactly the way it should be.

Last week, Toya Powell – USBC Director of Government Engagement – did a commendable job representing the USBC and its member chambers on a panel convened by Florida Congressman Allen West. Billed as a “Conservative Black Forum: The U.S. Economy and the African American Community,” the panel displayed clearly that the interests of Black-owned businesses are the same regardless of the political ideology espoused by experts across the political spectrum.

Congressman West, though a frequent critic of the Obama Administration, is an ardent champion of Black-owned businesses. He has demonstrated a thoughtful insight into the issues that undergird our Five Pillars of Service — Advocacy, Access to Capital, Contracting, Entrepreneur Training and Chamber Development – and clearly recognizes the delicate balancing act entailed in increasing opportunity for Black-owned businesses while shrinking the size of federal government. Since our introduction to him, he has included us in his legislative work around issues related to business.

Besides our own Toya Powell, among the star power assembled by Congressman West, was arguably the most successful Black businessman of our times, Robert Johnson, the founder of Black Entertainment Television (BET) who parlayed that success into the RLJ family of companies, a conglomerate with interests in hotels, professional sports teams and real estate, among other industries. Joining him on the panel was Dr. Arthur Laffer, author of the “Laffer Curve” (his theory of supply-side economics) and advisor to Republican administrations over the past three decades.

Johnson, a self-described “loyal” Democrat, and Laffer, easily delivered the perspectives often defined as liberal vs. conservative, but Johnson’s impassioned insistence on including some race-based remedies for bolstering Black wealth given patterns of historical institutional discrimination in federal policies was by far the highlight of the panelists’ exchange.

The difference in perspectives along party lines was entertaining, but it was more striking that despite right vs. left/conservative vs. liberal/Republican vs. Democrat, I think it’s safe to say there was unanimous agreement among ALL panelists that something has to be done to improve opportunities for America’s Black-owned businesses to grow, expand and earn. In turn, this growth and increased earning will help Black businesses play a larger role in helping to heal broken families, educational systems and the host of societal challenges that confront our communities nationwide.

The USBC is right at home in that conversation, whether convened by Rep. West or by President Obama. In fact, as part of our 2nd Annual School of Chamber Management (July 24-28), 100 of America’s Top Black businesses will attend a White House briefing on – surprise! – roughly the same topic as Rep. West’s recent panel.

Thanks to Toya, David Smith and Heather Holmes here in our office, the unwavering support of our board and corporate supporters, your USBC is making a difference in Washington’s response to the plight of Black Business. Thanks to Congressman West we have gained new allies in this crucial battle to improve the economic health of the African American Community… GROW BLACK BUSINESS!

In the spirit of success,