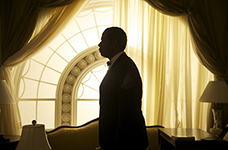 The film, which is slated for release on August 16, tells the true story of Eugene Allen, a butler who served at the White House from 1952 to 1986. Lee Daniels (Precious) is director of the film that stars Forest Whitaker as Allen, Oprah Winfrey as his wife, and David Oyelowo as his son.

The movie was inspired by Wil Haygood’s Washington Post article about a black man (Eugene Allen) who served in the White House under eight presidents over three decades — from the Eisenhower administration through Ronald Reagan’s presidency.