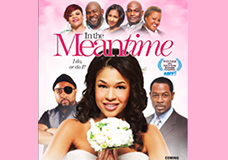 UP, America’s favorite channel for uplifting entertainment, presents the UP Original Movie In The Meantime starring Kali Hawk (Bridesmaids, Couples Retreat ), Darrin Dewitt Henson (The Express, “Soul Food”), Terri J. Vaughn (Friday, “The Steve Harvey Show,” “Sugar Mommas”) and Grammy©-nominated artist Musiq Soulchild in his film debut.  A romantic comedy with heart, In The Meantime will premiere exclusively on UP on Saturday, August 17, and Sunday, August 18, 2013 at 7, 9 and 11 p.m. EDT.

In the Meantime is the story of Jazmin “Jazz” Welles (Kali Hawk) a confident, educated woman who thought her path in life was all laid out in front of her. When she loses her job and her longtime aspiring artist fiance Blac (Musiq Soulchild) decides they need to take a six-month break from each other before getting married, Jazz loses direction.

“In The Meantime is a simple story that mirrors everyday life in so many ways, and, that’s a significant part of what drew me to this script,” said Roger Bobb.

In the Meantime is the second UP Original film to trace its roots to a grand prize-winning script at UP’s annual Faith and Family Screenplay Competition at ABFF in Miami.  In 2012, UP’s World Premiere Movie Raising Izzie  was the first film to win the competition.