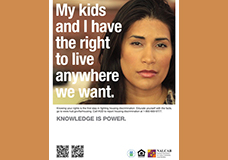 The Fair Housing campaign was designed based on research that shows minority homebuyers and tenants are not always aware when they have been subjected to discrimination; that a large segment of the public is not even aware of the rights and protections afforded by the Fair Housing Act.

“We know that housing opportunities shape our access to jobs, educational opportunities for our children and even our health. Understanding our fair housing rights is key to protecting the American Dream, for each of us individually and as a nation collectively,” stated Noel A. Poyo, Executive Director.

The campaign will include television and radio spots in English and Spanish, in addition to providing other materials in five Asian languages. While the outreach will be on a national level, the campaign will go deep into eight markets through targeted media and partnerships with community-based organizations. The target markets and organizations are: