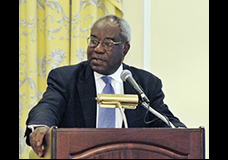 Mr. Chambers devoted his entire life to civil rights law. His dedication to equality and justice was shaped by his formational experiences as a boy in segregated North Carolina.  He was a brilliant law student at University of North Carolina Law School where his reputation first caught the attention of then-LDF Director-Counsel, Thurgood Marshall. He graduated first in his class from UNC Law School, and was editor-in-chief of the law review. While teaching at Columbia Law School, he obtained a Master of Laws degree.

Mr. Chambers was one of the first two LDF scholarship recipients.  The other was Marian Wright Edelman, now President of the Children’s Defense Fund. He was also LDF’s first Legal Fellow. This began his lifelong association with LDF, where he worked as an intern and lawyer, cooperating attorney, board member and board chair, and finally as President and Director-Counsel, a position he held from 1984-1993.

In 1993 Mr. Chambers left LDF to become Chancellor at North Carolina Central University, his alma mater.  He remained chancellor until he retired in 2001, when he rejoined the firm of Ferguson, Stein & Chambers.

Mr. Chambers was known for his sharp mind, his relentless focus on law as a means of advancing civil rights, his understated sense of humor, and his unflappable demeanor.  He was a man of tremendous courage.  His home and his car were firebombed on separate occasions in 1965, and his office was burned to the ground in 1971, during the height of some of his most contentious civil rights litigation in North Carolina.  When he spoke of these events, Chambers was typically matter-of-fact, insisting always that you “just keep fighting.” Mr. Chambers sat among the greats – Thurgood Marshall, Jack Greenberg, Constance Baker Motley, Robert Carter – and he formed the connective tissue with the next generation of civil rights lawyers – many of whom he personally hired at the NAACP Legal Defense Fund.  Julius was an avid golfer, and while at LDF he founded the Julius Chambers Golf Invitational, a LDF fundraiser that for many years attracted golfers from all over the country.