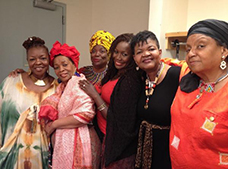 Thokoza, a company of six South African and African American women “of a certain age” will extend it’s current off-Broadway run of I SING FOR FREEDOM at Baruch Performing Arts Center August 5th, 12th, and 19th and September 9th ​through December 16th.

Conceived and directed by Thuli Dumakude, I SING FOR FREEDOM features women with a collective total of over 130 years of singing experience who sing acapella and unamplified the music that they love and that makes them feel free. Thokoza’s songs, many in six part harmonies, range from Southern church gospel to traditional South African Township songs sung in Zulu. Intertwined are personal stories from the performers’ rich and varied histories.   Director Thuli Dumakude was born in Durbin, South Africa. She has acted internationally, playing roles as varied as Rafiki on Broadway in The Lion King to Lady Macbeth in A Zulu Macbeth. She was the featured soloist in the movie CRY FREEDOM. Joining Dumakude in I SING FOR FREEDOM are Ghanniyya Green, Dee Sims, Brenda Fair, Silindile Sokuto and Debbie Carter.     Thokoza in I SING FOR FREEDOM is produced by veteran off-Broadway and Broadway producer Eric Krebs in association with Baruch Performing Arts Center.