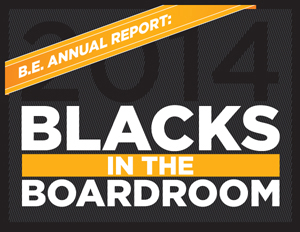 The report spotlights prominent African American directors including BLACK ENTERPRISE 2014 Corporate Executive of the Year Kenneth Frazier, Chairman and CEO of Merck & Co. and an ExxonMobil Corp. director; Ariel Investments L.L.C. Chairman and CEO John Rogers, who serves on the boards of McDonald’s and Exelon; and American Express Chairman & CEO Kenneth I. Chenault, who serves on the boards of AMEX, IBM, and P&G; among others.

The registry is drawn from the 250 largest companies on the S&P 500 based on market capitalization as of May 16, 2014. The BLACK ENTERPRISE research team compiled the listing by reviewing proxy statements and annual reports, as well as contacting investor relations departments, corporate governance experts, and organizations such as the Black Corporate Directors Conference and Executive Leadership Council (ELC); the latter is a network of the nation’s most highly ranked African American corporate executives. As such, 74, or 29.6%, refused to consider such representatives. That figure is virtually unchanged from the 2013 report.

“At a time when there is a surplus of black executive talent with sterling professional credentials and reputations for unmatched performance at the highest levels, an overwhelming number of boards of publicly traded companies still lock African Americans out of the boardroom.” Said Earl “Butch” Graves Jr., CEO and President of BLACK ENTERPRISE. “By denying African Americans access to a seat at the table, they have made a detestable statement that they seek to maintain these preserves of white male privilege and dominance.”

“Corporate directors govern the policies of CEOs and C-suite executives, ensuring senior management is accountable for a corporation’s hiring and promotion practices; billion-dollar spending decisions regarding suppliers, including media; and contributions to philanthropic organizations and causes, among other matters,” Graves added. “So if African Americans are not represented on a given board, it becomes highly unlikely that African Americans will be given fair consideration when that company selects senior managers, including CEO, CFO, and chief administrative officer positions; identifies Tier 1 or Tier 2 suppliers to provide the array of products and services-from legal and IT consulting to construction and advertising-that corporations purchase on an annual basis; and funds black-oriented civic organizations, community development efforts, and educational programs.”