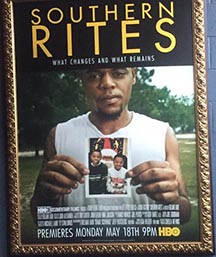 Southern Rites is an insightful and thought-provoking documentary that tells the story of two neighboring towns in Southeast Georgia entrenched in racial tension. Directed by acclaimed photographer Gillian Laub and executive produced by musician John Legend, Troy Carter and Mike Jackson, the 90-minute film examines race relations, a segregated prom, politics and the killing of an unarmed young black man that will forever bind the residents of these two small towns together.

Lucinda Martinez, HBO SVP of Multicultural Marketing said “The film is not only the story of the residents in Southeast Georgia but in many towns all over the country. Laub is a compelling storyteller and we’re proud to support her work.”

Montgomery County, GA first gained notoriety when Laub visited the small town of 9,000 residents in 2009 to document its proms, which remained segregated despite the integration of schools in 1971. Laub’s story went on to run in the New York Times, garnering national attention (ref: A Prom Divided, New York Times). A year later, Laub returned after the town combined its proms, to document the shift and also highlight an historic election campaign that may lead to its first African-American sheriff.

While Laub was in town filming, a white resident was charged with the murder of a young black man in Montgomery County’s neighboring town, Toombs County. As the case wears on, it divides locals in both towns along their well-worn racial lines, while the ensuing plea bargain and sentencing uncover complex truths and produce emotional revelations.

“This is a story that needs to be told,” said Director Gillian Laub. “This film is about giving a voice to the people of Montgomery and Toombs counties. This is their narrative. I’m grateful to HBO for their support and the opportunity.”

The film debuts the week of the Supreme Court’s landmark Brown v. Board of Education decision 61 years ago.

Southern Rites airs on HBO . Check your local schedule for repeat airing or purchasing on demand.

Check out "It's Janice", a radio show in the DC/Baltimore area that is focused on diverse businesses.  This week, hear...
Read more
Front Page