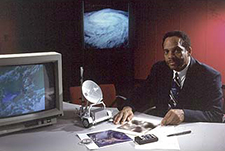 In honor of his many inventions and patents developed in a 34-year career at NASA’s Goddard Space Flight Center in Greenbelt, Maryland, George E. Alcorn, a pioneering African-American physicist and engineer, was recently inducted into the National Inventors Hall of Fame. The hall’s induction criteria require candidates to hold a U.S. patent that has contributed significantly to the nation’s welfare and the advancement of science and useful arts.

Alcorn was honored in the Flight and Exploration category for leading a four-person team that developed the first X-ray imaging spectrometer (essentially a device that allows scientists to identify elements using X-rays).

Sharing an aptitude for science, Alcorn and his brother, Charles, developed their interest in science technology while working in their father’s auto mechanic business. Both men went on to become accomplished physicists. “My father was always my idol,” Alcorn said. “I was impressed with his brilliance. He taught me that all obstacles in life could be overcome by hard work and determination. I applied this philosophy throughout my career.”

Alcorn received a degree in physics from Occidental College, Los Angeles, and a doctorate in physics from Howard University, Washington. He designed more than 30 inventions and received eight patents during his career in private industry and with NASA.

Alcorn’s work in private industry began in the 1960s. He worked as a research engineer performing orbital mechanics and trajectory analysis for the Titan 1, Nova and Saturn IV rockets for the Space Division of North American Rockwell. He also worked in the aerospace division of Philco-Ford, a division of the Ford Motor Company, which developed satellite-tracking systems for NASA’s manned space program. In addition he developed planetary life-detections schemes for Philco-Ford.

Alcorn held many leadership positions at Goddard in both research and administration. He began working at NASA Goddard in 1978, when there were very few African-American scientists or engineers affiliated with the agency. As the deputy project manager of advanced development, he led teams that developed technologies for the space station Freedom, a project that eventually evolved into the International Space Station. Alcorn ran the Goddard Evolution program, which provided development and operations for the center’s future growth. Following that, Alcorn oversaw a space shuttle experiment utilizing Robot Operated Material Processing Systems (ROMPs), which involved the manufacturing of material in the microgravity of space.