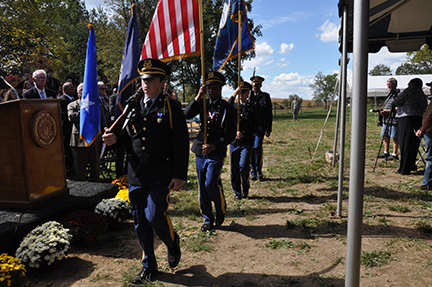 The name change to perpetuate the memory of Colonel Young is a significant honor. The high school is in the County where Charles Young was born into slavery in 1864. His family escaped and took up residence in Ripley, Ohio.

On September 28th, 2014 the Colonel’s bronze maquette was displayed in the cabin where he was born, and it was indeed a significant day. It was most likely his first return back to the place of his birth, however symbolic. He left the cabin in Kentucky as a slave and returned as an icon in the belief of the principle of democracy. The renaming of Mason County High School JROTC Program to honor his memory is a punctuation mark behind a great man’s history.

Lt. Colonel Cordingly and the Battalion are to be commended for the name change as well as their contribution in making the September Cabin Debut a success.  “This is a once in a lifetime opportunity,” he said. “There are people who accomplished great things in life, such as Colonel Charles Young.  His accomplishments are numerous. He was the third Black graduate from West Point in 1889, served as a Buffalo soldier, as well as military attaché to Haiti and Liberia during his career; served in the Spanish-American War; and served as acting superintendent of Sequoia National Park, among other achievements. So, it has been my goal since we had the ceremony at his birthplace, to change the name of the battalion and our crest to honor him.”

The birthplace of Young in May’s Lick was dedicated to his family last September after undergoing restoration by the county. The restoration performed under the leadership of former Mason County Judge-Executive James “Buddy” Gallenstein has added another century to the life of the structure. As a part of our visit, we will meet with members of the Maysville Planning Committee and the County Commissioners to discuss the next steps in moving the cabin project forward. Now that the structure is secure, we can talk about its future. I look forward to those conversations, but the highlight of the visit will be meeting with the Colonel Charles Young JROTC Cadets.   The visit will also allow us the opportunity to refocus public attention on our petition drive calling on President Obama to grant Colonel Charles Young an honorary promotion to the rank of Brigadier General. The petition is circulating on-line at: http://petitions.moveon.org/sign/an-honorary-presidential. We would like to take a million signatures to the White House in support of the promotion. We are reaching out to organizations including the National Association for the Advancement of Color People and the Fraternities and Sororities in the National Pan-Hellenic Council for assistance in circulating the petition through their memberships. We are also encouraging the general public to join the petition drive. We welcome the newly established Colonel Charles Young JROTC Battalion as Ambassadors for the cause. It is gratifying to see young people become interested and involved in learning and promoting history. We plan to call on the Cadets to assist with the Petition Drive among their peers and the Maysville Community. Their involvement will allow them the opportunity to educate the public about the history of their namesake.

We are planning May 13th as a special day for the Battalion and the community.  Arrangements have been made to bring the Colonel Young maquette back to Maysville. It has been on display for the past seven months in Louisville at the Kentucky Center of African American Heritage. The statue and accompanying photographs will be displayed at the Maysville’s Gateway Museum.  A new photograph will be introduced showcasing the September 28th event.

In addition, we have reached out to our Coalition Partners, State of Kentucky elected officials and military leaders past and present to join us in establishing the archive for the new Battalion. We have requested that they send letters of recognition to serve as the foundation for the new group’s history. It is our intention to provide the Battalion with an outstanding portfolio to build their new life as the first JROTC Battalion in the nation honoring the Soldier.

The public is invited to attend the May 13th “Day of Recognition.” It will be held at Mason County High School in the Field House. The facility is located at 1320 US 68 Highway in Maysville, Kentucky. The program will start at 9:30 A.M. For additional information contact the Coalition at e-mail address: cnmmmf@aol.com