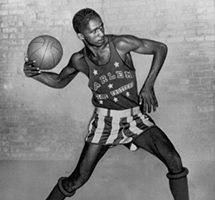 Legendary Harlem Globetrotter Marques Haynes – considered by many to be the greatest basketball dribbler of all-time – recently died of natural causes in Plano, Texas, at the age of 89. He passed away peacefully with family and friends in his presence.

In a four-decade career, Haynes played in more than 12,000 games, traveled more than four million miles and entertained fans in nearly 100 countries during two stints with the Globetrotters (1947-53, 1972-79). His dribbling style would confuse and confound opponents and became one of the Globetrotters’ most potent offensive weapons.

“The game of basketball has lost one of its most iconic figures,” said Globetrotters CEO Kurt Schneider. “Marques was a pioneer, helping pave the way for people of all races to have opportunities to play basketball and for the sport to explode on a global scale. His unique and groundbreaking style of play set the tone for modern basketball as we know it; anyone involved with basketball worldwide is indebted to Marques. He was the consummate Globetrotter.

“We will be dedicating our upcoming 90th anniversary tour in 2016 to Marques, and the team will wear a commemorative patch on our uniforms to salute the significant contributions he made to basketball and the Globetrotters,” said Schneider.