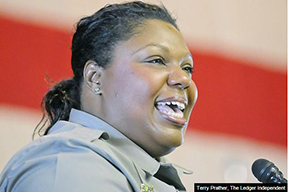 The JROTC changed its battalion name to the Col. Charles Young JROTC battalion on March 8 in honor of Young, who graduated from West Point in 1889 and went on to serve as a Buffalo soldier, as well as military attache’ to Haiti and Liberia during his career. He also served in the Spanish-American War; and served as acting superintendent of Sequoia National Park, among other achievements.

During the program, National Coalition of Black Veteran Organization Chairman Charles Blatcher III, who traveled from Oakland, Calif., for the presentation, told the JROTC students how pleased he was with the name change.

Blatcher is heading up efforts to have Young posthumously promoted to brigadier general.

“You made a favorable impression on a lot of people on Sept. 28, 2014, at the (Young) cabin. You were proficient, professional, polite and very well poised. You contributed to the success of that program. Thank you and I commend you on the name change to the Col. Charles Young JROTC battalion. (Young) would be proud to know you carry his name forward.”

Blatcher also presented the JROTC students with a painting of Young that will hang at MCHS, a commemorative poster and a t-shirt with the name change.

“What you did on March 8, renaming your battalion, is a step in the right direction. It helps raise public awareness of how black soldiers were treated. It’s an issue that should be brought to light to highlight how we have progressed from those difficulties. It says that we stand together for the promotion of (Young).”

JROTC Senior Instructor Lt. Col. Thomas Cordingly spoke on Young and why he should be remembered.

“This recognition and the renaming of this battatlion is not about us. It is about honoring (Young) and honoring him as an American who, in the face of adversity, went through West Point, which in the best of times is very difficult, and under the circumstances he went through, almost inconcievable. He went on to graduate. He was the third African-American to graduate, but the first to make a full military career out of it. His career is absolutely outstanding. He retained the rank of full colonel. In the best of times, in this day, is a sign of absolute success.”

“So, as a person, we want to recognize him and always remember him,” Cordingly said. “More importantly, what he fought for was the right to be though of in a certain way. We don’t want to remember him as an African-American, a black American, a colored American. We want to remember him as an American warrior. We talk a lot about race, but I am of the opinion there is one race, the human race. We need to start thinking of ourselves as a part of the same human race with the same dignity and same values. If we can do that, then I know (Young) would stand up and applaud, because that is what he fought for.”

Mason County Schools Superintendent Rick Ross pointed out characteristics of Young that each person should strive to possess — perseverance, work ethic, pursuit of opportunities beyond circumstances and respect.

“This man was not born in the best of times to be an African-American,” Ross said. “He had a positive outlook on life. And, he had a tremendous work ethic.”

Charles Young National Monument Superintendent Joy Kinard said she traveled from Ohio just to see the students and praise them for the name change.

“I did not want to miss this for anything. I am so thankful that I was able to come from Ohio to be here with you today. Words can’t express how I feel right now,” she said. “I had to come look into your eyes to see there are still conscious young people. There aren’t a lot of young people who are conscious enough to realize that there needs to be a shift in role models. I am humbled by you. I am encouraged by you. And, I just want to say to continue to strive for excellence, continue to make a difference and continue to stand out and not fit in.”