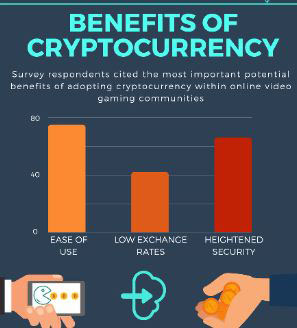 “The widespread usage of cryptocurrency in online video gaming is imminent,” said William Quigley, CEO of WAX Token. “Video gamers are tech-savvy members of a global community with the desire to make frequent, small transactions across borders. The results of the study could not be clearer: video gamers want to be able to use cryptocurrency to make low cost gaming-related transactions.”

The virtual video gaming items market is plagued by high fees and exchange rates, inefficient intermediaries, and slow transaction times — issues that could be solved by the widespread adoption of a purpose-built cryptocurrency.

Gamers see many potential benefits to be gained from using cryptocurrency in video gaming, with over 75 percent of gamers citing increased ease of use as a major benefit. Additionally, 66 percent expressed interest in the heightened security and 49 percent would enjoy the faster processing speeds. Furthermore, 42 percent like how cryptocurrency radically reduces exchange rates and 44 percent desire lower transaction fees.

Other interesting facts include: