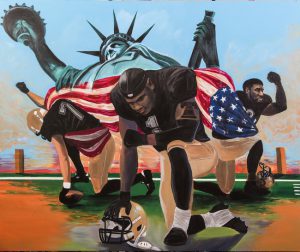 In an unprecedented move, OneUnited Bank, the largest Black owned bank in America, unveils the “Take A Knee” Campaign with a stunning masterpiece, Last Man Standing, by internationally acclaimed artist Addonis Parker. The protest art evokes the importance and burden of activism in America, featuring three football players kneeling during the national anthem. The Take A Knee Campaign is a nod to the national #TakeAKnee movement started by Colin Kaepernick and followed  by over 180 football players including Eric Reid and Kenny Stills in which they refused to stand during the national anthem and instead took a knee in silent protest of police shootings of unarmed Black people and the need for criminal justice reform.

OneUnited Bank unveils Last Man Standing and the #TakeAKnee Campaign to take the #BankBlack and #BuyBlack Movement to the next level. The Bank will donate to the American Civil Liberties Union or ACLU and to BMe Community, in honor of Leon Ford, a BMe Community Genius who is a survivor of police brutality, for each new customer that opens a checking account between October 25, 2018 and December 31, 2018. The Bank will also extend an invitation to all OneUnited Bank customers to become a member of the ACLU and donate to BMe Community.

“Throughout history, art has been used to raise awareness about social issues and affect positive change. We are honored to unveil ‘Last Man Standing’ and support the ACLU and BMe Community as we continue to support the #BankBlack and #BuyBlack Movement and advocate for social justice,” says Teri Williams, President & COO of OneUnited Bank.

OneUnited Bank will make a $25,000 minimum contribution to each organization. For more information on how to participate in the Take a Knee Campaign visit www.oneunited.com/takeaknee.