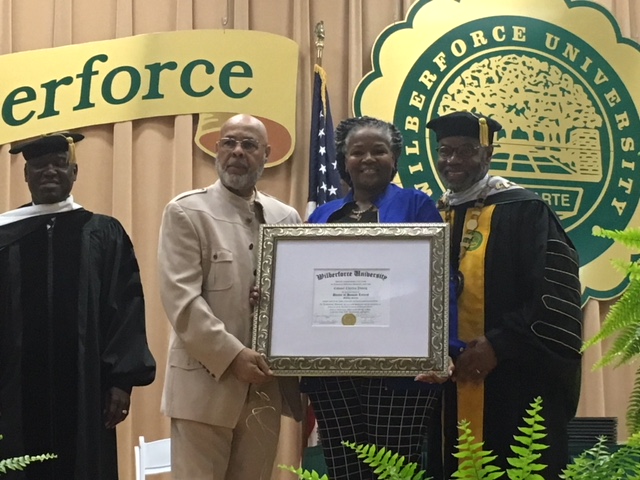 Colonel Young is significant in American History. He was a Soldiers’ Soldier, an Educator and Diplomat, a poet, composer/musician and play-write. His accomplishments are too numerous to mention them all. In-part, he was the third Black graduate of the United States Military Academy at West Point; he became the first African American appointed Superintendent of a National Park; Professor of Military Science and Tactics at Wilberforce University; the first African American to serve as a military attaché’ to a foreign government; the first African American to reach the rank of colonel in the United States Army; and, he was the highest ranking Black Officer in the Armed Forces for most of his career that spanned thirty-three years. He was the recipient of the prestigious NAACP Spingarn Medal.

Wilberforce University was an important part of Charles Young’s life. Lieutenant Young arrived on campus in 1894 following the death of Lieutenant John H. Alexander, the second Black Graduate of the United States Military Academy at West Point. Lt Alexander was assigned to the University in the capacity of Professor of Military Science and Tactics. He died less than a month into the assignment. Lt. Young was his replacement and remained as the Professor of Military Science until 1898. The Colonel and his wife Ada, (former residence of Oakland, California) had a fondness for the area and adopted the community as their home beyond his reassignment. I understand the decision. It’s a beautiful part of the country.

Founded in 1856 and named in honor of the 18th Century abolitionist William Wilberforce. The University stood as a beacon of intellectual thought. In the mid 1890’s, the campus was a draw to the Black intellectual minds of the time. Among its most noted alumni were Professors W.E.B. DuBois and Lieutenant Charles Young. Dr. DuBois became the co-founder of the National Association for the Advancement of Colored People, and Lieutenant Charles Young went on to become the highest ranking Black Officer in the Armed Forces.

A few years ago, members of our Coalition sponsored a bus tour of the area. It was interpreted by Dr. Floyd Thomas and the late Dr. Jerry Gore both experts in the history of the area and Colonel Young. The tour begun at the National Afro American Museum, (the Institution is the nation’s largest repository on the history of the Colonel.) It ended at the birth cabin of the Colonel in Mays Licks, Kentucky where we were met by members of the community. Between Wilberforce and Mays Lick, Kentucky lies the National Monument, the home where the Young’s resided and the community of Ripley, Ohio where he lived his formative years. The Omega Psi Phi Fraternity is to be commended for the stewardship they maintained over the Young’s home before donating it to the public trust. Our Coalition refers to the route between the three cities as the “Colonel Charles Young Corridor.” A part of the highway that runs by the cabin has been designated the “Colonel Charles Young Memorial Highway.” If you like history, nice people and good food consider a visit.

In our efforts to raise public awareness of the man and his history, we are releasing a CD entitled, “Colonel Charles Young, the Man, the Mission and the Facts.” The double set CD contains his life’s history included with a bonus recital of poetry he wrote reflecting his thoughts during leisure times. We have also recently released the late Morrie Turner’s cartoon publication entitled “Wee Pals and the Kid Power Gang Salutes African Americans in the Military Past and Present.” Morrie’s talent to draw was recognized while serving as a Tuskegee Airmen in World War II. His work was first published in the “Stars and Stripes Magazine.” He went on to become the first African American syndicated cartoonist in America. We are offering both items in our efforts to raise the funds to erect a statue in our nation’s capital to memorialize the Colonel’s June 6, 1918 horseback from Wilberforce to Washington DC to prove his fitness to remain on active duty in the Army. He covered the distance of 497 miles in sixteen days.

Colonel Young died on January 8, 1922 in Lagos, Nigeria. This article began with my mention of the friendship between Dr. W.E.B. Dubois and Colonel Charles Young. Dr. Dubois memorialized his friend in the following eulogy. It appeared in the February 1922 edition of the “Crises Magazine.” “The life of Charles Young was a triumph of tragedy. No one ever knew the truth about the Hell he went through at West Point. He seldom even mentioned it. The pain was too great. Few knew what faced him always in his army life. It was not enough for him to do well-he must always do better; and so much and so conspicuously better, as to disarm the scoundrels that ever trailed him. He lived in the army surrounded by insult and intrigue and yet he set his teeth and kept his soul serene and triumphed.He was one of the few men I know who literally turned the other cheek with Jesus Christ. He was laughed at for it and his own people chided him bitterly, yet he persisted. When a white Southern pygmy at West Point protested at taking food from a dish passed first to Young, Young passed it to him first and afterward to himself. When officers of inferior rank refused to salute “colored officer” he saluted them. Seldom did he lose his temper, seldom complain.

With his own people he was always the genial, hearty, half-boyish friend. He kissed the girls, slapped the boys on the back, threw his arms about his friends, scattered his money in charity; only now and then behind the Veil did his nearest comrades see the Hurt and pain graven on his heart; and when it appeared he promptly drowned it in his music-his beloved music, which always poured from his quick, nervous fingers, to caress and bathe his soul.

Steadily, unswervingly he did his duty. And Duty to him, as too few modern men, was spelled in capitals. It was his lode-star, his soul; and neither force nor reason swerved him from it. His second going to Africa, after a terrible attack of black water fever, was suicide. He knew it. His wife knew it. His friends knew it. He had been sent to Africa because the Army considered his blood pressure too high to let him go to Europe! They sent him there to die. They sent him there because he was one of the very best officers in the service and if he had gone to Europe he could not have been denied the stars of a General. They could not stand a black American General. Therefore, they sent him to the fever coast of Africa. They ordered him to make roads back in the haunted jungle. He knew what they wanted and intended. He could have escaped it by accepting his retirement from active service, refusing his call to active duty and then he could have lounged and lived at leisure on his retirement pay. But Africa needed him. He did not yell and collect money and advertise great schemes and parade in crimson-he just went quietly, ignoring appeal and protest.

He is dead. But the heart of the Great Black Race, the Ancient of Days-the undying and Eternal-rises and salutes his shining memory: Well done! Charles Young, Soldier and Man and unswerving Friend.” (End quote) Colonel Young would be proud in knowing that time has not eroded memories of his past years on campus. We salute the University – President Elfred Anthony Pinkard, and the Division of Academic Affairs for acknowledging the legendary Buffalo Soldier. On the behalf of the National Coalition of Black Veteran Organizations, we were honored to be joined by a member of the Colonel’s family in accepting the honorary Doctorate of Military Science and Tactics on his behalf. He fits the full measure of being worthy of the recognition. He was a credit to humanity and it is fitting the recognition is coming from Wilberforce University.

You may run this story and photos as long as you send a link to the email above.

Shown below is Colonel Young 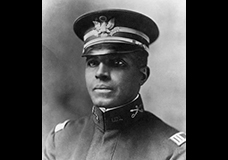