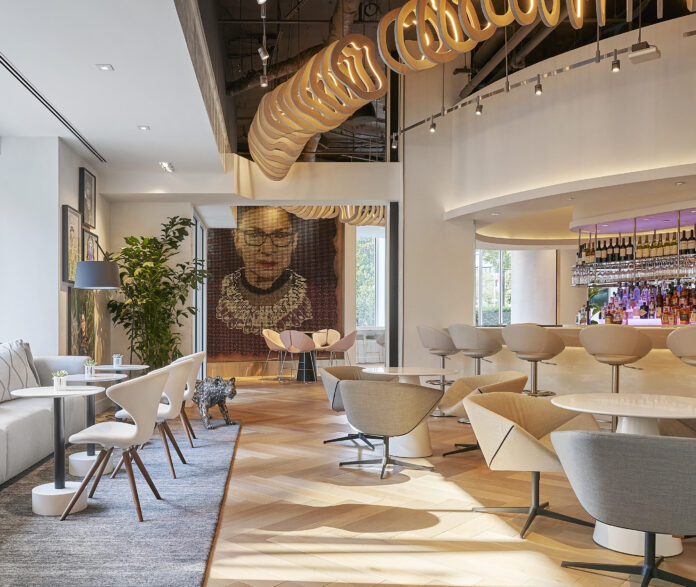 An ode to feminine strength, the new hotel celebrates women’s accomplishments on the 100th Anniversary of the Women’s Right to Vote through provocative and immersive art and design

Viceroy Hotels & Resorts is changing the conversation in Washington D.C., and beyond, with the opening of Hotel Zena, a bold new cultural hub celebrating the accomplishments of women and recognizing their enduring struggle for gender equality. It’s an interactive venue where every architectural line, material and art installation was thoughtfully designed and curated to send a message of female empowerment.

Situated at the nexus of Downtown D.C. and the vibrant Logan Circle neighborhood and renewed 14th Street, the 191-room hotel is not only a story about women. It’s also a celebration of people who work together to achieve fundamental civil rights, in a warm, dynamic, and inviting hotel with comfortable spaces featuring artwork commissioned to create a message of struggle, empowerment and hope.

Jon Bortz, CEO of Pebblebrook Hotel Trust expressed it this way: “We created a safe gathering space that celebrates diversity, respects different points of view, and opens the floor to topics worthy of meaningful conversation. We know we’re pushing boundaries and might even make some people uncomfortable – and we’re okay with that.”

Conceptualized by the internationally award-winning design firm Dawson Design Associates (DDA), every curve of the architecture was designed to lead to another moment of discovery for those with the time to explore. Provocative art and design are at the core of Hotel Zena, where guests are immersed in over 60 pieces of gallery-quality art created specifically for Zena by a distinguished group of artists from around the world working globally for the cause of human rights. The art revolves around the courage of some of the world’s most notable people and their fight for inclusivity and change. All the pieces are original and painted, photographed, sculpted and stitched by feminists of both genders with powerful stories to share.

“It is a simple story, and long overdue,” said Andrea Sheehan, DDA’s founding principle and art director. “I have been working hand in hand with Jon Bortz and Pebblebrook Hotels over the past 20 years experimenting in creating powerful and interactive hotels, including Pebblebrook’s Unofficial Z Collection. This is our “Female Z,” and the first Z Hotel on the East Coast. We wanted to make it a powerful statement. Given its strategic location and our society’s current state, it just made sense to us to take a public stand central to its creation. We both believe in the power that art can play in bringing people together.”

“Hotel Zena was created primarily by women, for people, both women and men. It is a hotel that offers a haven for all genders, races, and sexualities; where an atmosphere of strength and femininity live in harmony,” said Bill Walshe, CEO, Viceroy Hotels & Resorts. “As our second hotel to open in Washington. D.C. this year, following the debut of Viceroy Washington D.C., we are looking beyond the power and politics of the city to better position our nation’s capital as a hub for culture, unity, and empowerment.”

The hotel opens at a pivotal time in the nation’s history. Its lobby is dominated by an extraordinary portrait of the late, honorable Justice Ruth Bader Ginsburg. Its pointillist concept, conceived by Andrea Sheehan and produced by Julie Coyle Studios using 20,000 hand-painted and repurposed tampons, is a contemporary, intimate spin on this classic art form. This unique portrait honors both Justice Ginsburg’s life-long dedication to women’s rights and equality and her humor in the most personal and intimate form. The tampons were donated by CORA, which supports Ruth Bader Ginsburg’s message of female unity while promoting sustainability and opportunity for women. Another iconic installation, a curving wall layered with 8,000 protest buttons representing generations of marches and events promoting the feminist movement, pays tribute to America’s 100th anniversary of the Women’s Right to Vote.

The “Portrait Gallery” in Hotel Zena’s lobby features the stories of female warriors. It displays artwork celebrating ten powerful women, in addition to Ruth Bader Ginsburg, who have made significant contributions in the struggle for Women’s Rights and Gender Equality. Additional portraits include the indomitable Shirley Anita Chisholm, the first African American woman elected to the United States Congress and the first woman Democrat to run for President of the United States. It is one of two pieces of art inspired by Ms. Chisholm; the other is a hanging installation constructed of painted folding chairs in celebration of her famous statement: “If they don’t give you a seat at the table, bring a folding chair.”

Numerous art pieces created by regional artists were brought forward by local curator Jason Bowers to supplement the artwork from other parts of the world. They can be found throughout the hotel, including the mural of female warriors standing as sentinels on Hotel Zena’s exterior designed by D.C. based art director, muralist, designer, and illustrator Cita Sadeli, more popularly known as MISS CHELOVE. Her vision for Hotel Zena’s mural was to create an atmosphere of intrigue composed of a pair of fierce yet curious warrior-sentinel women protecting the sanctity of the space.

Hotel Zena abounds with powerful statements celebrating the dynamic and proud people who have fought for women’s rights.