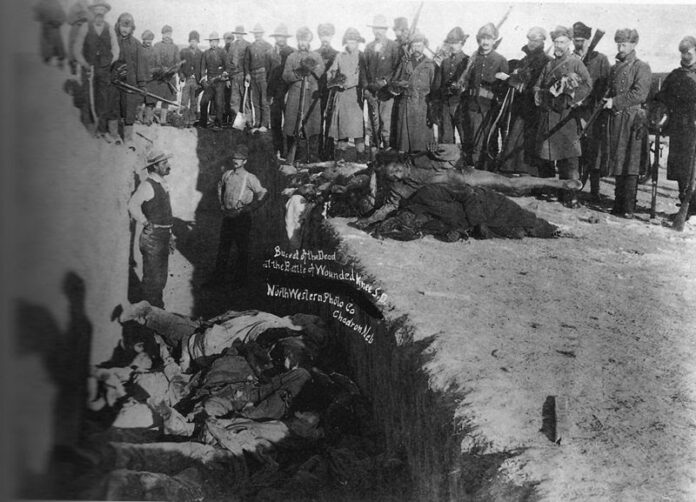 The National Coalition of Black Veteran  Organizations on behalf of our affiliate groups proclaim our unwavering support of our Native American brethren by supporting the passage of the Remove the Stain Act.

The Act pursues rescinding Medals of Honor awarded to those American  soldiers who perpetrated the act of massacring 200 noncombatant young men, women, and children of the Lakota Tribe at Wounded Knee Creek. The Act would serve as a step in recognizing the tragedy of the Era with truth serving as the foundation toward Peace and Justice.

The Blacks interaction with the Native American Communities is the nine-hundred-pound elephant in the room speaking of History. The Native American community suffered its own holocaust and the Black community contributed to their losses.  We also recognize that some of our ancestors fought and lived together in cooperation, and the groups formed an agricultural and military alliance. Native American Tribes gave shelter to runaway enslaved Africans.  The act prompted the Seminole Indian War of 1835. The United States Army invaded the Seminole Tribes in Florida to recapture the slaves they gave refuge.  Those captured were returned to the plantation owners.  Black enlistment in the Armed Forces were banned through this period in our history.

Following the Civil War when West Expansion begun, Native Americans were marked for extinction. Prior to the Western Expansion their population numbers were estimated in the millions. By 1890 the population was reduced to two hundred and fifty thousand. Sitting Bull, Geronimo and Crazy Horse may had been enemies of the United States, but they were freedom fighters for their people. We are fortunate to have a National Native American Museum, so the history is not lost to time.

In that same vein, the Buffalo Soldiers Museum showcases some the history which includes more than 160 battles and skirmishes, pursuit campaigns, and roundups of various Native American Tribes from 1867 to 1890. The 9th and 10th Cavalries and the 24th and 25th Infantry Regiments participated in more than 30 years of bloody and occasionally severe combat, exclusive of the Wounded Knee  Massacre. And although their efforts were heroic in nature, the Buffalo Soldiers played an integral role in the oppressive atrocities that befell Native Americans.  The Act acknowledges those innocent lives lost and the atrocities of the past.

The prevailing interest of the Coalition is pursuing the truth in the recognition and presentation of our military history. We have led the advocacy for the promotion of Charles Young to the rank of Brigadier General for decades.  We have contributed to the public’s education and generated national discourse about the history. It has never been our intention to promote or glorify the mayhem of war.  Nor overlook the injustices committed for whatever reasons by either side.

Our focus is on seeking public recognition and governmental redress of the historical injustices committed against the Native American community. “While we speak out about what is owed to Black Veterans,” we have not forgotten the apologies and the debts we owe.”

The National Coalition of Black Veteran Organization vehemently supports the “Remove the Stain Act.” The Act will be a positive step in offering an apology for atrocities of the past and to contribute to the cause of healing and reconciliation.