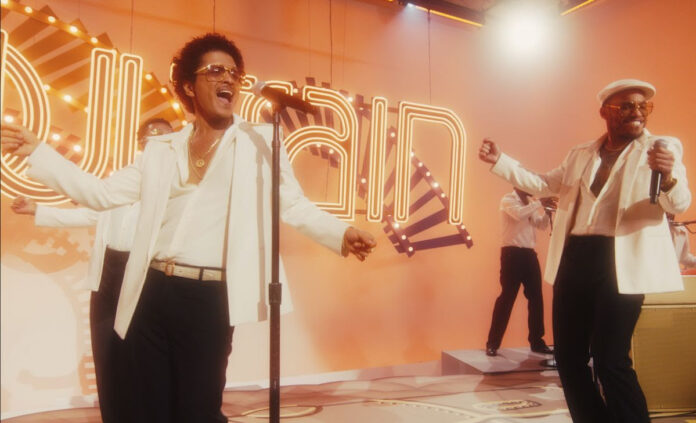 This year, the 2021 “Soul Train Awards” presented by BET, commemorated the 50th anniversary of the Soul Train television show legacy, marking the milestone with a star-studded event showcasing today’s reigning R&B/Soul artists. For the very first time, the “Soul Train Awards” took place at the World Famous Apollo in Harlem, NYC and dynamic best-friend duo Tisha Campbell and Tichina Arnold returned as co-hosts of this year’s awards, which premiered on Sunday, November 28 on BET, BET Her, MTV2 and VH1. Adding to the excitement, BET also held the first-ever “Soul Train Awards Weekend,” a three-day multiplatform celebration, that featured several events including the ‘Leading With Soul Luncheon,’ ‘Soul Surprises,’ and the formation of a Guinness World Record-breaking Soul Train line. The Network also continued its investment in community recovery and wellness with its distribution of $100,000 in microgrants to ten Harlem Businesses and non-profits and helping feed the Harlem community at two local community-based organizations. Watch an encore airing of the 2021 “Soul Train Awards,” Tuesday, November 30 at 5:30 PM ET/PT on BET. The 2021 “Soul Train Awards” will air internationally on BET Franceon December 1,at 10:30 PM CET. The show will also be available to watch on My5 and Sky On-Demand, in the UK, beginning December 3.

R&B/Soul super duo Bruno Mars and Anderson .Paak, Silk Sonic’s stirring rendition of “Fly As Me” kicked off the evening and took us back in time to an exact replica of the iconic Soul Train set. Ciara and Russell Wilson, and Marley Dias received Souls of Justice Award in moving video tribute. Next was a dazzling performance by songstress Ari Lennox who beautifully sang “Pressure” while commanding the stage in a gorgeous ensemble embellished with white feathers. Singer/songwriter Lucky Daye had the audience swooning with a sultry performance of his hit song “Over,” which samples Musiq Soulchild’s “Halfcrazy.” Gospel singer Fred Hammond who proclaimed he was turning the show into the “Soul Train Tabernacle Awards,” delivered an empowering rendition of “Yahweh.” Adding to the impressive lineup, BET Amplified artists Marzz and Elhae also gave memorable performances sponsored by Ford. Following separate introductions from Mack Wilds and Tone Stith (the latter of which reflected on his own experience performing on the BET Amplified stage), Marzz and Elhae wowed the audience with captivating renditions of “Countless Times” and “FOMO,” respectively.

This year’s highly anticipated Soul Cypher, presented by AT&T, was hosted by the prolific DJ D-Nice and featured the stunning vocal talents of Tone Stith, Koryn Hawthorne, Jac Ross, Elle Varner and Musiq Soulchild. As a nod to the 20th Anniversary of her self-titled album Aaliyah, the late R&B great’s hit single “Rock the Boat” provided both the theme and instrumental for the thrilling cypher.

R&B/Soul singer Ashanti was crowned “Lady of Soul” at this year’s Awards, an honor sponsored by Walmart and presented to her by Normani, who spoke about emulating her famous style growing up. Ashanti embodied elegance while accepting the award to the backdrop of a cheering audience. The songstress later returned to the stage for an electrifying performance of some of her biggest hits including “Happy,” “Rain On Me,” “Baby,” and fan-favorite “What’s Luv” with surprise guest Fat Joe, which prompted the audience to sing along. Ja Rule then joined Ashanti, reuniting the famous 2000’s duo for a crowd-pleasing performance of “Always On Time.” Ashanti ended her performance with her #1 hit, “Foolish.”

In what proved to be one of the evening’s most special moments, honoree Maxwell was presented with the Ford-sponsored Legend Award by Jazmine Sullivan. As Sullivan presented the award, she reflected on Maxwell’s influence both on the industry and in her own life, commenting how he was one of the only people who gave her a chance. After her touching speech about his humble beginnings and rise to success, Maxwell, who transformed his look to resemble his first album cover, accepted the award and expressed gratitude, visibly moved by the emotional moment. The singer then brought endless soul to the stage, performing a medley of his classics including “Til the Cops Come Knockin’,” “Bad Habits,” “Sumthin’ Sumthin’” new song “Off” and closing out with crowd favorite “Ascension,” as he walked through the crowd, serenading attendees.

BET also held the first-ever “Soul Train Awards Weekend,” a three-day multiplatform experience that celebrated the best in commerce, music and entertainment. The weekend kicked off with the “Leading With Soul” Luncheon, honoring executives known for meaningful work and leadership. Sponsored by Dove and hosted by media personality Tai Beauchamp, the luncheon honored Esi Egleston Bracey of Unilever North America with the ‘Corporate Champion Award,’ Louis Carr, a veteran of BET and leader in sales for global brands with the ‘Legacy Award,’ Cheryl McKissack Daniel & Deryl McKissack of McKissack & McKissack, with the ‘Black Business Icon Award’ for their professional design and construction firm, and Jonelle Procope, President and Chief Executive Officer of the World Famous Apollo with the ‘Community Hero Award.’