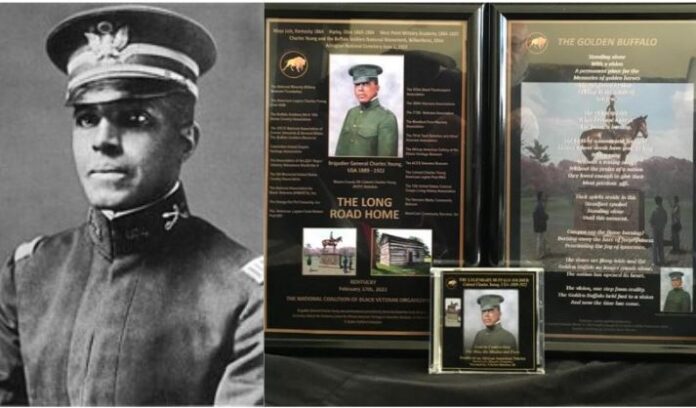 On  March 12, 2022, we call Brigadier General Charles Young’s name with the title that befits his life work and in honor of the journey from his birth. His birth date of March 12, 1864 was followed by a lifetime of battle and enduring struggle,  yet in 2022, joy came with the restoration of his honor as he received the deserved, earned promotion in title from Colonel to Brigadier General. With gratitude on Brigadier General Charles Young’s  March 12 birth date, we stand in honor of his  promotion and say  ‘happy birthday’ for a life that is now decorated with the honors he deserves.

Charles Blatcher, who has led the multifaceted effort with positions such as Principal Advocate for the Colonel Charles Young Promotion Campaign, Chairman of the National Coalition of Black Veteran Organizations, and Founder/CEO of the National Minority Military Museum Foundation. The road to the promotion for Charles Young unfolded like the adding of the birthday candles to  his cake of celebration.

In 2022, the acknowledgement of Charles Young began with the recognition of the 100th Anniversary of Colonel Charles Young’s  death on January 8 in 1922 – still facing  the unknown fate of the promotion.  In February 2022, the  page of fate turned as the White House announced that Colonel Charles Young would be posthumously promoted to his earned title of “Brigadier General.”  Now, in March, Young’s birthday is especially recognized by the people who have fought for this promotion for Charles Young over some 40 years.

“In my mind, it was never a question of if it would ever happen. The question was all ways when?” said Blatcher. “The question was answered on February 17, 2022, when Kentucky Governor Andy Beshear presented the Star and a flag to members of Charles Young’s family in a ceremony at the Kentucky Center for African American Heritage in Louisville. The mood was celebratory.  However, as I sat during the proceedings with members of the Veterans Coalition, the public, representatives of the military and the Governor’s Administration, “I still wondered why it took forty-one –years of advocating for it to happen but pleased the day had finally arrived. It is always a great day when we as a nation can look back and make amends for past oversights and errors in judgment. The redress is a sign of our growth as a nation.`

Blatcher now celebrates Brigadier General Charles Young’s birthday, with thoughts of his journey to right the wrongs of history. He was inspired by retired Sergeant Samuel Waller, the Spanish American War veteran who planted the seed in his mind of his friend Colonel Young. In the sentiments of Waller, “The injustice committed was because of the color of his skin. He was a Black man in a White man’s army during a period when Jim Crow was the law of the land.” Sergeant Waller called Charles Young the best officer in the United States Army in the early 1900s.

There were many public officials who dismissed the effort of granting the promotion. There were newspaper editors who viewed Blatcher’s persistence as nuisance and zealot. There were many critics who ignored the request touting conflicts in the historical record. Over the years, the advocacy grew from a handful to twenty-one organizations joining in the unity of purpose. We reached the promotion finish line together with the focus now shifted to erecting a statue of Brigadier General Young in our nation’s capital.  The National African American Museum has been asked to allow the statue to be placed on the museum grounds. The statue will memorialize then Colonel Charles Young’s historic walk/horseback ride from Wilberforce, Ohio to Washington, DC in 1917. The journey was undertaken to prove his fitness to return to active duty following a forced medical retirement from the Army. The General’s home in Wilberforce, Ohio became a national monument in 2013 donated by the Omega Psi Phi Fraternity to the National Park Service. The birth cabin of Charles Young in Mays Lick, Kentucky has been restored, and open to the public for visitation.

In the photo: Shown is Brigadier General Charles Young, next to “The Long Road Home” Commemorative Poster/CD set is available to the public as a fundraiser for the Statue Project.