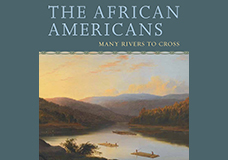 Henry Louis Gates, Jr., Alphonse Fletcher University Professor and director of the W. E. B. Du Bois Institute for African and American Research at Harvard University, and Donald Yacovone, research manager at Harvard University’s W. E. B. Du Bois Institute, will publish their collaborative effort based on the highly anticipated PBS documentary of the same name, The African Americans: Many Rivers to Cross, October 1, 2013 (SmileyBooks ISBN: 978-1-4019-3514-6).

The African Americans: Many Rivers to Cross is the companion book to the six-part, documentary series of the same name by Henry Louis Gates, Jr. airing Tuesdays, (October 22 – November 26, 2013 at 8pm ET/PT) on PBS. Remarkably, the series is the first of its kind since 1968 to chronicle cohesively 500 years of African American history. Detailing African Americans from the origins of slavery on the African continent and the arrival of the first black conquistador, Juan Garrido, in Florida in 1513, through five centuries of remarkable historic events right up to today-when Barack Obama is serving his second term as President.

“The story of African American people is the story of the settlement and growth of America itself. A universal tale that all people should experience,” says Dr. Gates. “Since my senior year in high school, when I watched Bill Cosby narrate a documentary about black history, I’ve longed to share those stories in great detail to the broadest audience possible, young and old, black and white, scholars and the general public.”

The African Americans: Many Rivers to Cross , the book, explores a range of topics in even more detail than made possible in the television series. Dr. Gates examines many other fascinating topics such as the ethnic origins of both regional and cultural diversity of Africans whose enslavement led to the creation of African American people. It delves into the multiplicity of cultural institutions, political strategies, and religious/social perspectives that African Americans have created in the half a millennium since their ancestors first arrived on the shores of America. Like the television series, this book guides readers on an engaging journey through the Black Atlantic world-from Africa and Europe to the Caribbean, Latin America, and the United States-to shed new light on what it has meant, and still means, to be an African American.