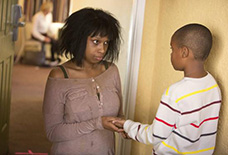 The Lifetime Original Movie event Call Me Crazy: A Five Film, which brings together an all-star ensemble cast with five interwoven stories about how everlasting bonds of love and family can overcome life’s most challenging hurdles, will make its world premiere on Saturday, April 20, at 8:00pm ET/PT.

“When we started researching this topic, we were all surprised to learn that one in four adults lives with some sort of mental illness. With so many people dealing with this in their private lives, there is still so much stigma and shame. It’s time we bring it out of the closet and into the light of day,” said Aniston.

Kauffman added, “We are so proud to be a part of this powerful television event. To work with such amazingly talented directors, writers and actors, and for Lifetime to give us the opportunity to tackle such an important issue is nothing less than miraculous. We are extremely grateful to be able to shed even a little light on this topic, and we fervently hope that this is just the beginning of the mental health discussion in our country.”