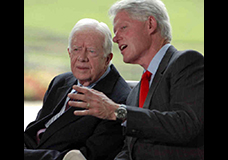 Will Deliver Remarks at the ‘Let Freedom Ring Commemoration’ August 28, 2013

The 50th Anniversary March on Washington Coalition announced  that former Presidents Bill Clinton and Jimmy Carter will join President Barack Obama to commemorate the 50th anniversary of the historic March on Washington and Dr. Martin Luther King, Jr.’s “I Have a Dream” speech in Washington, D.C. on August 28, 2013. Obama, Clinton and Carter will deliver remarks at the Let Freedom Ring Commemoration and Call to Action event at the Lincoln Memorial.

Obama, Clinton, Carter and King family members, along with coalition members and dignitaries, will honor Dr. Martin Luther King, Jr.’s call to “Let freedom ring” by ringing bells at 3:00 p.m. ET, a half-century to the very minute after Dr. King delivered his historic address.  Groups across the country will also pause to mark the 50th anniversary of Dr. King’s speech by ringing bells at 3:00 p.m. ET in their home states.

“Martin Luther King’s unforgettable speech inspired millions of Americans to make a deeply personal commitment to racial equality and economic justice.  Its wisdom and power continues to inspire us today.  I’m honored to lend my voice to this important celebration of one of our greatest leaders and most historic days,” said President Bill Clinton.

The 50th Anniversary March on Washington Coalition has organized a series of events to commemorate and celebrate this historic event, including a Global Freedom Festival, open to the public from August 24-27 on the National Mall, and an Interfaith Prayer Service at the Martin Luther King, Jr. Memorial prior to the Let Freedom Ring Commemoration event on August 28.

“It is an honor to participate in this ceremony as we remember a great man, a heroic leader and a noble message that still rings as true today as it did 50 years ago,” President Jimmy Carter said. “This commemorative event is an opportunity to speak about Dr. King’s dream of equal rights and equal opportunity for all.  Dr. King’s legacy remains an inspiration for us all on this special anniversary and will continue to for generations to come.”

“I’m honored to meet my father’s call to ‘Let freedom ring’ with President Obama, President Clinton and President Carter,” said Bernice A. King, chief executive officer of The King Center.  “Together with people across America and the world, we will pause to mark the 50th anniversary of my father’s ‘I Have a Dream’ speech, affirming the unity of people of all races, religions and nations.”

The Let Freedom Ring Commemoration and Call to Action event will take place from 11:30 a.m. – 4:00 p.m. ET at the Lincoln Memorial on August 28.  For more information on the 50th Anniversary March on Washington ‘Freedom, Jobs, Peace and Social Justice,’ please visit www.mlkdream50.com .  Media who wish to cover the Let Freedom Ring Commemoration may apply for credentials here: www.mlkdream50.com/credentials.