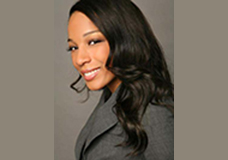 Rev. Al Sharpton, President of National Action Network, has announced that Janaye Ingram will become Acting National Director of the organization he founded in 1991. According to Rev. Al Sharpton: “I am deeply impressed with the leadership shown by Janaye Ingram as she has effectively handled National Action Network’s Washington, DC, Bureau for the last two years and spearheaded our historic 50th anniversary March to Continue the Dream.

“I am appointing her as Acting National Executive Director of National Action Network and she will immediately move forward with our plans to do deal with Voter ID in North Carolina, Texas, and other states, and with gun violence in Chicago,” said Rev. Sharpton.

According to Janaye Ingram: “I am honored to be selected to serve as the Acting National Executive Director of National Action Network. Since stepping into the role of Washington Bureau Chief a little over two years ago, my goal has always been to work toward creating a more just and fair society. Having worked on initiatives including NAN’s Voter Engagement Tour, 2012 and 2013 National Convention and the National Action to Realize the Dream Rally & March among others, I am delighted to step into this new role with added vigor and commitment to serving the community. I take this responsibility with great humility and look forward to new challenges and victories in the fight toward justice.”

Delaware Chancery Court Justice Tamika Montgomery-Reeves will be sworn in as a Justice on the Delaware Supreme Court. Her swearing...
Read more
- Advertisment -