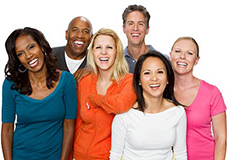 The larger the group, the smaller the chance of forming interracial friendships, a new University of Michigan study shows.Published in the Proceedings of the National Academy of Sciences, the study examines how the size of a community affects the realization of people’s preferences for friends.

“We found that total school size had a major effect on the likelihood that students would form interracial friendships. Large schools promote racial segregation and discourage interracial friendships,” said Xie, a sociologist with the U-M College of Literature, Science and the Arts, Institute for Social Research and the Gerald R. Ford School of Public Policy.

Their model incorporates the widely held assumption that people prefer to make friends with others of the same race. It also incorporates many other preferences that affect friendship formation. These factors include age, education, hobbies, personality, religious affiliation and political beliefs.

Cheng, a U-M graduate student in sociology, and Xie, who is also affiliated with Peking University, note that their work has implications for other social relationships, such as dating, marriage, political coalitions and business affiliations.

“One potential negative social consequence of the Internet as a social interaction medium in an ever more globalized world is to encourage social isolation and social segmentation by expanding group size immensely,” Cheng said.