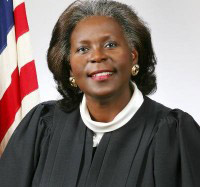 Justice Patricia Timmons-Goodson was an Associate Justice of the Supreme Court of North Carolina from 2006 to 2012, an Associate Judge on the North Carolina Court of Appeals from 1997 to 2005, and a District Court Judge for the Twelfth District of North Carolina from 1984 to 1997.   She began her career as a District Manager for the United States Census Bureau in the Department of Commerce from 1979 to 1980.  Justice Timmons-Goodson has served in several leadership positions with the American Bar Association, and is a member of the Guilford College Board of Trustees and the Advisory Committee of the North Carolina Judicial College.

Chairman Martin R. Castro said, “I thank President Obama for selecting Justice Timmons-Goodson as our new Vice Chair. Her temperament, intellect and common-sense approach will serve us well in this important leadership post at the Commission.”

Vice-Chair Patricia Timmons-Goodson said, “I appreciate President Obama’s confidence in my ability to assist Chairman Castro and to help lead the U.S. Commission on Civil Rights. I pledge to work at all times to further our vital mission of protecting and advancing the civil rights of all citizens”

The U.S. Commission on Civil Rights is an independent, bipartisan agency charged with advising the President and Congress on civil rights matters and issuing a federal civil rights enforcement report.