In partnership with adidas, Lyft, P&G, and Reebok, LeanIn.Org is highlighting the unfairness of this pay gap and the double discrimination that holds Black women back.

“The pay gap facing Black women is an urgent problem,” said Sheryl Sandberg, COO of Facebook and founder of LeanIn.Org. “It has huge financial implications for millions of families. And it signals something deeply wrong in our economy. We need to address the gender and racial inequalities that give rise to this imbalance—and create workplaces where everyone’s labor is valued, everyone is treated with respect, and everyone has an equal shot at success.”

With the help of adidas, Lyft, P&G, and Reebok—all leaders in the push for equality in the workplace—LeanIn.Org is asking consumers to think about the impact of getting 38 percent less as they make everyday purchases on August 7.  At adidas and Reebok stores across the country and on adidas.com and reebok.com, customers will see the messages of #38PercentCounts on everything from shopping bags to purchase receipts. Lyft is asking riders to imagine if their trip ended with 38 percent left to go after each ride on August 7—and P&G is sponsoring campaign videos that bring to life the impact of the pay gap on real women and their families. Salesforce, an equal pay pioneer, is providing the financial support for various Lean In Circle events around the country to bring awareness to the pay gap for Black women.

On Latina Equal Pay Day on November 1, LeanIn.Org and our campaign partners will do the same to highlight the 46 percent pay gap Latinas face.

For Black women, being paid less is just the tip of the iceberg. Compared to white women, Asian women and Latinas, Black women receive less support from managers and are promoted more slowly. These unique challenges faced by Black women—and women of color more broadly—are examined in LeanIn.Org & McKinsey & Company’s annual Women in the Workplace study. 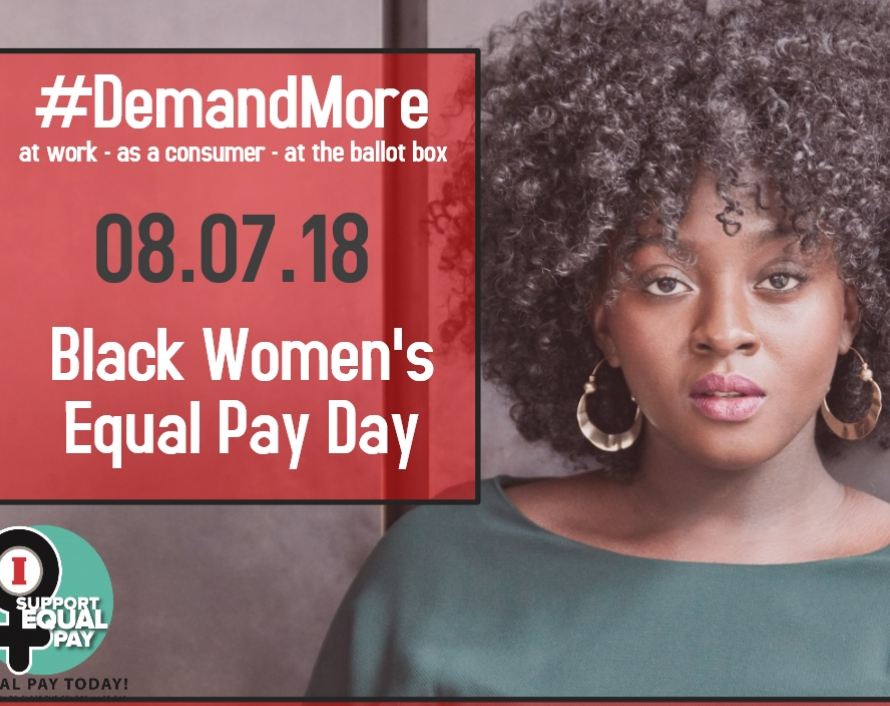 “Black women deal with double discrimination every day—they face biases for being women and biases for being people of color. One place where we see that double effect is in the 38 percent pay gap,” said Rachel Thomas, president of LeanIn.Org. “That translates to more than $800,000 lost over the course of a career with staggering real-world implications. We’re grateful to our partners and the Lean In community for working to raise awareness of the pay gap Black women face.”

LeanIn.Org, SurveyMonkey, and the National Urban League’s recent survey findings also show that even when people know there’s a pay gap, it’s bigger than they realize. Forty percent of people who are aware of the pay gap Black women face underestimate its size.  Moreover, the data show significant differences in how Black women see the workplace compared to everyone else. About half of white men think obstacles to advancement for Black women are gone but only 14 percent of Black women agree. Moreover, nearly 70 percent of people who are not Black think that racism, sexism or both are uncommon in their company—yet 64 percent of Black women say they’ve experienced discrimination at work.

“The lack of awareness about the pay gap at their own workplace, particularly among hiring managers –two-thirds of whom say there is none– is an insight we hope drives organizations to take action,” said Sarah Cho, Director of Research at SurveyMonkey. “Conducting a pay equity study is a powerful way to bring this topic into clear terms, but we also hope these data spark curiosity within companies to measure perceptions about inclusion, so they can build broader programs and policies to help drive meaningful change that lasts.”

“Our plan is that bringing awareness to this injustice will lead to concrete action,” said Marc H. Morial, President and CEO of the National Urban League. “Not only would fair pay for Black women drastically narrow the racial economic gap, but it would go a long way toward stabilizing our national economy. Because Black women disproportionately are heads of households, fair pay would create a ripple effect that could lift entire communities.”

To further bring the impact of the pay gap to life, LeanIn.Org collaborated with Annabelle Hayford, the creator of the viral hashtag #DrawingWhileBlack, to illustrate a series of cartoons that highlight the unfairness of the pay gap for Black women. Additionally, LeanIn.Org is releasing a video of Black women and their families—many from our Lean In Circles community—explaining what earning less means for them. When asked what 38 percent more would mean in their lives, one woman says she could retire comfortably, another says it would go toward her son’s education, and a family explains they could use the lost income to buy a house—or “two houses, actually,” says their son.

Their sentiments are supported by a large body of research that underscores the benefits of closing the pay gap for Black women. Lower earnings for them means less money for their families, especially since more than 80% of Black mothers are primary breadwinners for their households. If Black women were paid fairly, they would earn on average almost $870,000 more over the course of their career.

At leanin.org/38percentcounts visitors will be able to show their support for #38PercentCounts, watch our campaign videos, and see the Black women’s pay gap “by the numbers.” In addition, business leaders and managers will learn what they can do to close the pay gap in their companies, and women will learn expert tips and tricks for negotiating more effectively.

With the help of large-scale distribution and advertising partners—including Facebook, Instagram, PayPal, and SoFi ––#38PercentCounts is also reaching millions of people online.

KEY FINDINGS FROM 2018 BLACK WOMEN’S EQUAL PAY SURVEY CONDUCTED BY LEANIN.ORG AND SURVEYMONKEY IN PARTNERSHIP WITH THE NATIONAL URBAN LEAGUE:

Even when people know there’s a pay gap, it’s bigger than they realize. On average, Black women are paid 38% less than white men, which amounts to almost $870,000 lost over the course of a typical career. 40% of people who are aware of this gap underestimate its size.

People are overly optimistic about the state of Black women. About half of white men think obstacles to advancement for Black women are gone, but only 14% of Black women agree. Moreover, nearly 70% of people who are not Black think that racism, sexism or both are uncommon in their company—yet 64% of Black women say they’ve experienced discrimination at work.

Almost everyone agrees that earning less is a huge problem. 85% of Americans think it would be a major problem or crisis if they earned 40% less money. Yet compared to white men, Black women face this pay gap every day.

When people know there’s a pay gap, they think it’s unfair. When presented with information that Black women on average are paid 38% less than white men, 72% of Americans think it’s not fair.