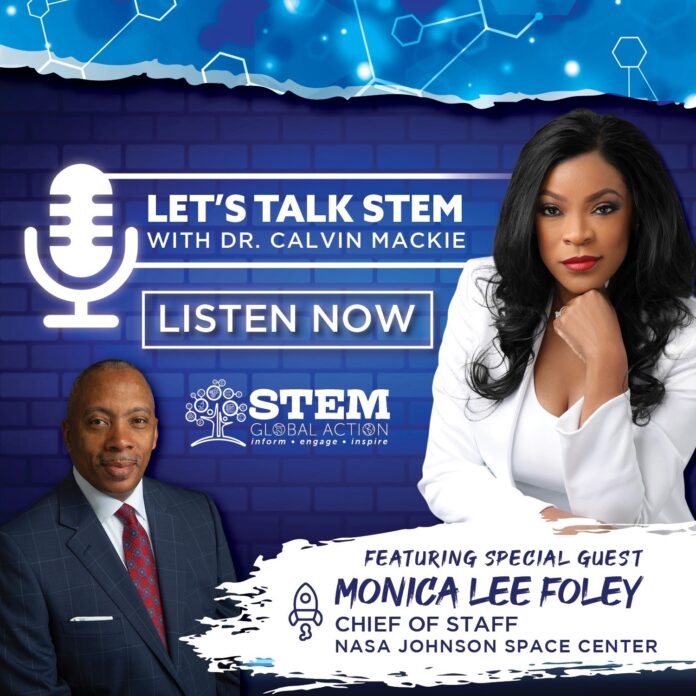 NEW ORLEANS, LA – Monica Lee Foley, Chief of Staff for the NASA Johnson Space Center, joined the Let’s Talk STEM with Dr. Calvin Mackie podcast and shared her incredible story: an African American woman from Baton Rouge, LA who became a rocket scientist, flight controller for the international space station, overseer of its electrical power systems and manager of U.S. and Russia negotiations on behalf of the space program.

Her journey began as a teenager visiting Southern University and A&M College, a public Historically Black University in Baton Rouge.

“I’m literally walking by the physics building on the campus of Southern University and a student comes out, and he’s kidding, but he’s serious. And he says, ‘If anyone wants to major in physics, they are literally giving scholarships away.’ ‘‘

It was music to Monica’s ears.

She was skipping her senior year of high school and had the credits required to enter Southern, where she received a full physics scholarship. “Long as I can remember, I have loved science and mathematics. Love. Love. Love. I was the child that wanted to take things apart to figure out how they worked and could most times put them back together again,” she recalls in her inspirational conversation on the new episode of Let’s Talk STEM with Dr. Calvin Mackie podcast.

“I’ve been at NASA for nearly 25 years,” she says. “I started off as a flight controller for the international space station. I was there from the very beginning of the building or the assembly of the space station.  I was responsible for the electrical power systems where I earned three certifications in that area, which was unheard of at the time. I was the first human being to do so, not the first female, not the first African American, the first human to do so.”

The purpose of space exploration, Monica says, is to better understand the universe so it can influence quality of life on earth. “That’s the whole purpose and vision of NASA. That’s why we’re going back to the moon. That’s why we’re going to Mars,” she says, adding that space travel may help us improve disease treatments, grow crops with limited water and soil or create clean water.

The acclaimed STEM expert discusses a wide range of topics in the engaging podcast discussion.

Dr. Mackie says the remarkable conversation, and Monica’s life story, exemplify the abilities, skills and intellect of women and people of color when provided opportunities to excel in science, technology, engineering and mathematic (STEM). “This is why we are committed to expanding STEM education in Black & Brown communities across the country,” says Dr. Mackie, the founder of STEM Global Action, a campaign and network of affiliates advancing STEM education for children, parents and communities.

Since 2013, when Dr. Mackie founded STEM NOLA, a New Orleans-based, non-profit, his initiatives pioneering STEM education directly in communities has impacted more than 80,000 students, 20,000 families and 2,150 schools across the U.S. and in five countries abroad. This summer, Dr. Mackie founded STEM Global Action, which oversees STEM NOLA and other affiliates across the country and in Africa.

Seven Sisters and a Brother