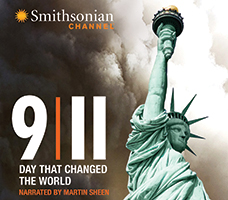 Personal accounts and recollections from one of the most tragic days in U.S. history are shared in the Smithsonian Channel original documentaries 9/11: Day That Changed the World and 9/11: Stories in Fragments. The program is now available on DVD.

Looking back — It began as a beautiful, sunny day, but in a matter of minutes, lives were lost and the safety of our nation was in immediate peril. The events of Sept. 11, 2001 are etched in the memory of all who lived through the catastrophe, but few know the intimate stories that were unfolding that day, behind the scenes at the White House and in front of the eyes of survivors, witnesses, and anguished families.

Now, many years later, the events of September 11, 2001, still resonate – especially for the people who were in critical leadership positions on that fateful day. Hear intimate accounts from New York Mayor Rudy Giuliani and the chiefs of the NYPD and FDNY, Secretary of Defense Donald Rumsfeld, Vice President Dick Cheney and many others who found themselves at the center of the action. Unprecedented decisions.  Unimaginable tragedy.  This is the definitive story, from 6 am to midnight, of a day that changed the world. This commemorative collection from Smithsonian Channel gives you an unparalleled account of the most significant and tragic day in modern American history, with two original documentaries:

9/11: Day That Changed the World reveals how our nation’s leaders rapidly responded to a crisis that was beyond the scope of anyone’s experience. Featuring interviews with Rudolph Giuliani, Donald Rumsfeld, Dick Cheney and many other decision makers. Narrated by award-winning actor Martin Sheen.

9/11: Stories in Fragments enters the Smithsonian’s National Museum of American History, where the Sept. 11 collection displays some of the everyday items recovered from New York, the Pentagon and Shanksville, Penn. These ordinary objects tell extraordinary stories, which deserve to be remembered for decades and generations to come.