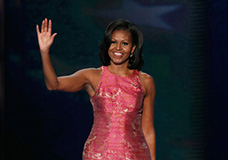 “The Dr. Oz Show” will welcome First Lady Michelle Obama, whose advocacy for child nutrition and health have been a cornerstone of her work while in the White House, to discuss two new issues that are part of her Let’s Move! Initiative – improvements to the federal guidelines for school lunches that go into effect this school year and updates to the Presidential Youth Fitness Program. The nationally syndicated, two-time Daytime Emmy® Award-winning “The Dr. Oz Show” will broadcast the show featuring First Lady Michelle Obama nationally Sept.14.

As part of the appearance on “The Dr. Oz Show,” Mrs. Obama will talk about how the changes to the school lunch program will help kids become healthier. The new federal nutrition guidelines for school lunches include more whole grains, fruits, and vegetables, and low-fat milk dairy products. In addition, the First Lady will reveal improvements to the Presidential Youth Fitness Program.

“Mrs. Obama works tirelessly to focus our nation on prevention and educate youth about the critical need to eat right and stay active. This message of prevention will imprint good habits on a generation of young people and result in longer lives and less disease. I am humbled and honored that the First Lady will appear on our show to ignite this conversation with my audience,” said host Mehmet Oz, M.D.

The First Lady and the White House are highlighting recent improvements to child nutrition and physical activity to coincide with the back-to-school season when children’s health is at the top of minds for many Americans. Her appearance on “The Dr. Oz Show” will air as part of the launch week of the top-rate daytime talk show’s fourth season, which begins Sept. 10.

The two-time Daytime Emmy® Award-winning “The Dr. Oz Show”, hosted by the two-time Daytime Emmy Award-winning host, Dr. Mehmet Oz, is now in its fourth season. “The Dr. Oz Show”, which is currently seen in 118 countries worldwide, debuted domestically in 2009 with the biggest ratings in nine years in daytime television.Dr. Oz has served as health expert on “The Oprah Winfrey Show” since 2004, sharing advice with viewers to help them live their best life from the inside out. Dr. Oz has co-authored six New York Times Best Sellers including “YOU: The Owner’s Manual”, “YOU: The Smart Patient”, “YOU: On a Diet”, “YOU: Staying Young”, “YOU: Being Beautiful” and “YOU Having a Baby” as well as the award-winning “Healing from the Heart”. He has a regular column in TIME Magazine and O The Oprah Magazine.