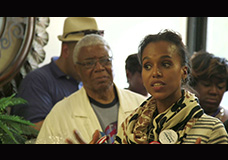 “…Coverage of this election is now ubiquitous, almost to the point of distraction for many viewers. We sought a new way to bring the biggest story of the year – the fate of the first African-American incumbent President – to our audience in an engaging, highly journalistic way,” said Loretha Jones, President of Original Programming and News, BET Networks. “We are excited to be working with Sam Pollard and Brick City TV who have helped us reinvent political coverage for our audience.”

“This groundbreaking series is a must see for the BET audience,” said Executive Producer Sam Pollard. “The series digs deep and hits hard and is a must see for viewers in understanding how they can’t just be bystanders but fully engaged in this historic election.”