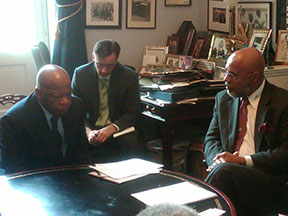 Washington, DC – Black military contribution to the democracy of the United States is too vast to fit into just 3,000 square feet of the new National Museum of African American History and Culture, according to members of the National Veterans Coalition.

Charles Blatcher, III, founding chairman of the coalition, joined by Lt. General Arthur Gregg, USA, Ret., Major Howard Jackson, USMC, Ret., and Renotta Young, a descendent of the legendary Col. Charles Young, met with representatives of the national museum project in the office of US Rep. John Lewis (D-GA) to discuss concerns of the nation’s black military veterans. The group questioned the size of the exhibit dedicated to black military history and the overall focus of African American achievement in the US military theater.

In mid-2003, Congressman Lewis wrote legislation that would establish the country’s first national museum dedicated to African American history. In December 2003, President George W. Bush signed it into law. Congressman Lewis’ efforts secured a commitment of $250 million in matching public funds for the project. The remaining portion of the half-billion-dollar enterprise is expected to be fulfilled by corporate/private donations.

“Military history is the cornerstone of the black Americans’ claim for civil rights and equal treatment,” Blatcher said. “Every gain made in our historic struggle for civil rights has come on the heels of our participation in the Armed Forces. Our coalition of black veterans organizations believe the existing plans would not give due reverence to the subject matter.”

He suggested the 3,000 sq. ft. space be used as a temporary gallery for rotating exhibits. As the exhibits close for the next feature they could be toured around the country in local museums. Blatcher strongly argued for more input from America’s leading authorities on black military involvement.

Dr. Rex Ellis, Associate Director for Curatorial Affairs for the Smithsonian Institute and Cheryl L. Johnson, Senior Government Relations Officer, met with the veterans group and provided general information. According to Dr. Ellis, the total display area for the project will be 85,000 sq. ft. and will hold twelve galleries.

Based on information provided by the Smithsonian, the proposed 3,000 sq. ft. for the military history display would be less than half of the 7,450 sq. ft. available, in equal allotments, to the other eleven display galleries. Coalition members demanded to know how the space allocations were determined.

Dr. Ellis said each gallery will include black military history that coincides with the time period articulated; however, not fully convinced of adequate exposure as may be given to sports and entertainment Blatcher said, “The public would be better served if the presentations on the subject of black military history are centered on singular eras and events. The concentrated focus would provide a more comprehensive view and understanding of the what, why, where, who and how factors of black participation in the defense of the nation.”

Congressman Lewis iterated the scope of the institution would be broader in content than sports and entertainment. He assured Coalition members that Civil Rights will be a prominent part of the national museum’s presentation.  He offered his personal trust and assurance that the Smithsonian Institute will “do the right thing.”

Renotta Young emphasized, “Our children, the nation and the world deserve a more in-depth presentation of who we are and our contributions as a race of people.”

Blatcher said: “Trust would be easier if there were some verifiable facts to support it. The Coalition has called on G. Wayne Clough, Secretary of the Smithsonian Institute, to release information pertaining to the proposed floor plans for the national facility. We were disappointed information requested was not made available at the meeting by the representatives of the national project. We were told by Cheryl Johnson the information requested did not exist.”

The coalition expressed equal concern about the overall direction of the national project. The museum has the potential of being far more significant in the national community, according to Blatcher. The group’s directors believe the national museum project offers the opportunity to convene black scholars in public discussion about the various aspects of how we should be presented in the national forum.

Johnson acknowledged broader outreach efforts should be made to encourage greater public participation. She said the project is under-staffed functioning with 80 people well below the 150 employees required for a project of this magnitude.

She shared that the US Congress recently rejected an $85 million funding request and instead approved just $50 million, which impedes the progress of the project. Blatcher maintained that funding may not be as problematic if the Smithsonian would reach out to the black community for monies.

“Unfortunately, the target group has gone untapped as a source of funding support,” he said. “The coalition is prepared to assist the project by appealing to this target group to support the undertaking. Lt. Gen. Gregg, a Coalition Executive Council member, suggested the national museum invite scholars affiliated with the National Veterans Coalition to represent members’ interest in the project.

Further, the Coalition invited the museum to partner with them and the Golden Gate National Park Service in educating the public about the legendary Col. Charles Young and the contribution of the Buffalo Soldiers he so famously led.  The partnership would benefit all parties and the public as a whole.

Blatcher said, “The black Veterans community would be appreciative if the opening exhibit in 2015 would embrace our national effort to educate the public on this segment of our history.”

The National Veterans Coalition represents service men and women from every branch of the Armed Forces during war and peace times. Its membership is working with US Rep. Barbara Lee (D-CA) and other congressional leaders to award famed Buffalo Solider, Col. Charles Young, a posthumous promotion to Brigadier General.

Col. Young was denied this promotion in the early twentieth century because of the color of his skin.  He was the third African American graduate of West Point, the first black U.S. National Park Superintendent, first black Military Attaché, and first black serviceman to achieve the rank of colonel. The coalition made available to the museum representatives’ research information already gathered on the subject.