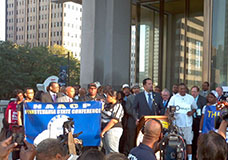 The NAACP recently hosted a rally against Pennsylvania’s voter ID law, ahead of the hearing, across from Pennsylvania Supreme Court steps.

The NAACP, State Conference, ACLU, several union leaders, and leaders of the church joined each other at the podium to pronounce their opposition to laws impacting the heart of our democracy.

Surrounding the rallying cries, “No matter what the ruling, WE WILL BE READY” and “You got your voter ID, THEN YOU KNOW ME,” speakers stressed that the right to vote should not be divided along party lines. There was also an air of remembrance, as speakers recognized the martyrs of the African American civil rights movement and plight: Medgar Evers, Harry T. Moore, the four little girls of the Birmingham Church Bombing, Troy Davis, and many more.

“Turning the tide, we have won in Texas and we have even won in the Republican states of Michigan and Virginia, but we find ourselves here challenging the law again.”

“This is not a Republican thing or a Democratic thing. It is an extremist thing.

All of us should have the right to vote.”

“We have not stopped fighting to turn this thing around. Despite attempts to use voter ID as a way to block the vote, we will make sure that people vote. Today we use the voice that the NAACP has been fighting to protect for over a century.”

“The NAACP has been the conscious of the nation for 103 years. We are hoping that the people in the statehouse today also have a conscious.”

“Whatever they decide, we need you to go out to every single neighbor, family member, friend, community leader, and register folks to vote. And then we need to see turnout like we have never seen before.”

“I believe in voter validation, however I also believe that these strict voter ID laws are being used to restrict the rights of thousand of voter ID laws.”

“I call on my fellow Americans to not allow anyone to take away the most important part of our democracy.”

“We are going to register voters, mobilize people, and ensure that we get you to the polls on Election Day.”

“The question is really why did you have to change the law?- Did you change the law because you knew that people lack photo ID in poor black and brown communities?”

Despite no evidence of voter fraud, House Bill 934 was passed on March 14, 2012. During the hearing, both Chairman Metcalfe (sponsor of the bill) and Attorney Bekesha, staff attorney at Judicial Watch, could account for no instances of voter impersonation fraud, the kind of fraud that voter identification laws would address.

The Department of Justice issued a letter in March requesting information from Pennsylvania to evaluate the Commonwealth’s compliance with Section 2 of the Voting Rights Act-which “prohibits voting practices or procedures that discriminate on the basis of race, color, or membership in one of the language minority groups.”